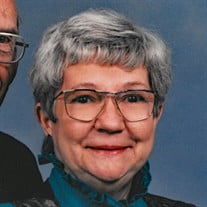 Joyce Leah Jones of Eureka, died on Saturday, March 30, 2019, at Greenwood County Hospital in Eureka at the age of 88. She was born April 6, 1930, in Climax, Kansas, the daughter of Louie and Artie (Anderson) Bate. She was raised in Climax and attended local schools, graduating from Climax High School. She worked for City Drug in Eureka, and for Southwestern Bell as a switchboard operator. She later worked at Sears & Roebuck and J.C. Penney in Eureka, before beginning her career as an assistant county clerk for Greenwood County. On July 18, 1952, Joyce was united in marriage to Harlan Andrew Jones in Eureka. They made their home in Eureka. To this union, four children were born. Harlan preceded her in death on June 15, 2002. Joyce was a member of the Climax United Methodist Church and later the First United Methodist Church of Eureka. She is survived by three children: Richard and wife, Ava Jones of Eureka; Casey and wife, Deb Jones of Adrian, Texas; and Nancy (Jones) Henley-Knight of Eureka; eight grandchildren; fourteen great-grandchildren; and a sister, Rebecca Parkin of Bartlesville, Oklahoma. She was preceded in death by her parents; husband, Harlan; a daughter, Leah Kay Jones; brother, Bert Bate; and great-granddaughter, Emily Elizabeth Patchett. Funeral services will be held at 2:00 P.M., Friday, April 5, 2019 at Koup Family Funeral Home, in Eureka with Pastor Kevin Lawrence of the Climax United Methodist Church officiating. Interment will follow at Greenwood Cemetery, in Eureka. Visitation hours are set from 5:00 P.M. to 7:00 P.M., Thursday, at the funeral home. In lieu of flowers, the family has requested that memorials be made to Veterans of Foreign Wars Post #2712 or to the Climax United Methodist Church. Contributions may be sent in care of Koup Family Funeral Home, P.O. Box 595, Eureka, KS 67045, which is overseeing arrangements. Condolences may be left for the family online, at koupfunerals.com.

Joyce Leah Jones of Eureka, died on Saturday, March 30, 2019, at Greenwood County Hospital in Eureka at the age of 88. She was born April 6, 1930, in Climax, Kansas, the daughter of Louie and Artie (Anderson) Bate. She was raised in Climax... View Obituary & Service Information

The family of Joyce Leah Jones created this Life Tributes page to make it easy to share your memories.

Send flowers to the Jones family.