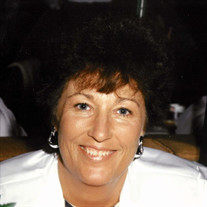 Joyce Elaine Johnson of Neal, died on Thursday, December 2, 2021, at her home in Neal, at the age of 77. She was born on August 1, 1944, in Eureka, the daughter of Amos Blossom and Aleda May (Shumard) Harber. She was raised in Neal and graduated from Tonovay High School. On August 26, 1962, Joyce was united in marriage to Marion Sydney Johnson in Neal. They made their home in California while Marion was in the service. After his discharge, they returned to Kansas, making their home in Wichita. To this union, four children were born. Joyce worked at Kmart and also ran a day care out of her home. She loved little children dearly as well as pets. When her children were small, she would always serve as a room mother in their classrooms. Joyce loved to mow the lawn, scrapbook, crafting things, baking, and was an excellent cook. In 2005, she and Marion retired to Neal where her love for children continued as she helped her grandchildren with their fair entries and other projects. She was a self-taught organist and pianist and played the organ at the Neal United Methodist Church. She will be remembered by those who loved her as a loving wife and mother, and devoted grandmother and great-grandmother. She was a member of the Neal United Methodist Church and the Greenwood County Hospital Auxiliary. She is survived by her husband, Marion of the home; three children, Steven and wife, Carol Johnson of Salida, Colorado; Michele and husband, Wallace Allen of Wichita; and Bryan and wife, Shannon Johnson of Neal; daughter-in-law, Stephanie Johnson; numerous grandchildren and great-grandchildren; and one sister, Betty Boone of Neal. She was preceded in death by her parents; son, Kevin Ray Johnson; brothers, Roy Lester “Pop” Harber, and Robert Joseph “Bigen” Harber; and her pet raccoon, Elvis. Funeral services will be held at 2:00 P.M., Thursday, December 9, 2021, at Koup Family Funeral Home, Eureka with Pastor David Siler of the Neal United Methodist Church officiating. Interment will follow at Neal Cemetery. Visitation hours are set from 5:00 P.M. to 7:00 P.M., Wednesday, at the funeral home. In lieu of flowers, the family requests that memorials be made to the Greenwood County Hospital Auxiliary or to the Alzheimer’s Association. Contributions may be sent in care of Koup Family Funeral Home, PO Box 595, Eureka KS 67045, which is overseeing arrangements. Condolences may be left for the family online, at koupfunerals.com.

Joyce Elaine Johnson of Neal, died on Thursday, December 2, 2021, at her home in Neal, at the age of 77. She was born on August 1, 1944, in Eureka, the daughter of Amos Blossom and Aleda May (Shumard) Harber. She was raised in Neal and graduated... View Obituary & Service Information

The family of Joyce Elaine Johnson created this Life Tributes page to make it easy to share your memories.