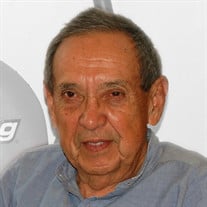 Joseph Albert Eppler, Jr died Monday, October 9, 2017, at his home in Severy, Kansas, at the age of 91. Joe was born July 24, 1926, in Pawnee, Oklahoma, the son of Joseph Albert and Myra (Lone Chief) Eppler. He attended several Indian schools, completing the 11th grade at the Haskell Indian School in Lawrence. Following his schooling, Joe enlisted in the Army, serving at Fort Riley, Kansas, until an injury forced his medical discharge. On February 11, 1965, Joe was united in marriage to Dorothy May Busch, in Wichita, Kansas. Together they raised seven children. Upon his discharge from the Army, Joe worked many different jobs, mostly in the plumbing business, until he began working for Pinsker Steel in 1984. He continued to work there until his retirement in 1995. Following his retirement Joe worked as a janitor before finally settling in Severy in 1999. He had a great love for mowing lawns, and mowed many lawns in the Severy area. He was a member of the Severy Baptist Church and the American Legion Carter – Rader Post #149 of Howard. Joe is survived by his wife, Dorothy, of the home; four sons: Joe Walker of Kansas City, Kansas; George Walker of Marquette, Kansas; Fred Walker of Hamilton, Kansas; and Albert Eppler, of Wichita, Kansas; three daughters: Betty Brinkley of Rose Hill, Kansas; Judy Burkhart of Severy, Kansas; and Rose Estigoy of Kansas City, Kansas; sixteen grandchildren and numerous great-grandchildren and great great-grandchildren. He was preceded in death by his parents and three siblings: Amelia Eppler; Val Eppler, and Teddy Eppler. Memorial services will be held at 2:00 P.M., Friday, October 13, 2017, at Koup Family Funeral Home in Eureka with Pastor Tony Pameticky of the Severy Baptist Church officiating. Cremation has been effected. The family has requested that memorials be made to the Severy Baptist Church. Contributions may be sent in care of Koup Family Funeral Home, P.O. Box 595, Eureka, KS 67045, which is overseeing arrangements. Condolences may be left for the family online, at koupfunerals.com.

The family of Joseph Albert Eppler, Jr. created this Life Tributes page to make it easy to share your memories.

Send flowers to the Eppler family.