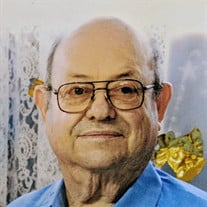 Joseph Richard Corle of Moline, died on Thursday, July 19, 2018 at Olathe Medical Center, in Olathe, Kansas, at the age of 80. He was born on August 24, 1937, in rural Montgomery County, Kansas, the son of Alfred Richard and Mabel Dora (Geren) Corle. He was raised in Longton and attended local schools. He worked on a ranch after high school and later ran heavy equipment. On July 4, 1958, Joseph was united in marriage to Patricia Boulanger in Longton. They made their home in Longton and later moved to Moline. To this union, two children were born. Joseph ran heavy equipment working for the State of Kansas and later for Elk County Road Department. During his retirement he drove the bus for Elk County public transportation. Joseph had a special love for his grandchildren, and he faithfully cared for animals, especially his horses. He is survived by his wife, Patricia of the home; two children, Barbara Jolene Corle of Howard; and Susan JoAnn and husband, Tolbert Livingston of Emporia; three grandchildren: Aquisha, Malik, and Myles Livingston; and his brothers, Larry Corle of Coffeyville; Charles Corle of Wichita; Gene Corle of Elk Falls; and Jim Corle of Cimarron. He was preceded in death by his parents, and sister, Nancy Tuck. Memorial services will be held at 11:00 A.M., Thursday, July 26, 2018 at the Flint Hills Assembly of God with Pastor Mike Stubbs of Victory Fellowship Church of Emporia officiating. Cremation has been effected. In lieu of flowers, the family has requested that memorials be made to the Elk County General Public Transportation or to the Moline Friendship Meals. Contributions may be sent in care of Koup Family Funeral Home, P.O. Box 595, Eureka, KS 67045, which is overseeing arrangements. Condolences may be left for the family online, at koupfunerals.com.

Joseph Richard Corle of Moline, died on Thursday, July 19, 2018 at Olathe Medical Center, in Olathe, Kansas, at the age of 80. He was born on August 24, 1937, in rural Montgomery County, Kansas, the son of Alfred Richard and Mabel Dora (Geren)... View Obituary & Service Information

The family of Joseph Richard Corle created this Life Tributes page to make it easy to share your memories.

Send flowers to the Corle family.