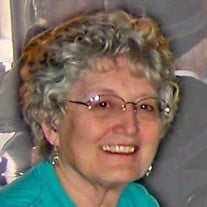 Joan Kirk Gryder, age 77, of Eureka, passed away on Tuesday, June 14, 2016 at home surrounded by her loving family. She was born on the Fourth of July, 1938 on the Kirk Ranch in Greenwood County, and was raised on the ranch with one younger sister. She was the daughter of the late Glen and Lucille (Pendergrass) Kirk. Joan attended Ivanpah School in western Greenwood County and then attended Eureka High School, graduating with the Class of 1956. After graduation she attended Kansas State University, majoring in Elementary Education. After starting her family Joan returned to the University of Kansas in the spring semester of 1970 to finish her Education Degree, returning to Eureka to become a Second Grade Teacher at Random School. In 1972 the School District asked her to become one of the first Learning Disabilities Teachers in the State of Kansas and she returned to school at Emporia State University to begin working on her Master’s Degree in Psychology. She taught in the Eureka School District for 28 years. Joan met James E. “Jim” Gryder at K-State and they were married January 25, 1959 at the First United Methodist Church in Eureka. They were very happily married for 57 years. Joan was a member of the Eureka United Methodist Church and was very active for many years in the Church Choir as well as a myriad number of other Church Activities. Joan enjoyed her family and especially loved attending her grandchildren’s various school activities and sporting events. She also enjoyed being a member of a variety of musical, social, and educational organizations such as Etude and PEO and served the community by being on the Board of the Carnegie Library for many years. She and Jim traveled extensively, often in one of their planes and often meeting their children or grandchildren at their destination. She is survived by her husband, Jim; and her three children, Kirk Gryder of Minneapolis, MN; Scott and wife, Debbie Gryder of Granbury, TX; and Jana and husband, Ron Peters of Frisco, TX; four grandchildren, Drew and wife, Taylor Peters of Lubbock, TX; Cameron Peters of Frisco, TX; and Jessica and Trisha Gryder of Granbury, TX. She is also survived by her sister, Nancy Kirk Lewis, and two nieces. Memorial Services will be held at 2:00 P.M., Saturday, June 18, 2016 at the First United Methodist Church in Eureka with Reverend Kenneth Baker officiating. Cremation has been effected. In lieu of flowers, the family has requested that memorials be made to the First United Methodist Church or to the Alzheimer’s Association. Contributions may be sent in care of Koup Family Funeral Home, P.O. Box 595, Eureka, KS 67045, which is in charge of service arrangements. Condolences may be left for the family online at koupfunerals.com.

Joan Kirk Gryder, age 77, of Eureka, passed away on Tuesday, June 14, 2016 at home surrounded by her loving family. She was born on the Fourth of July, 1938 on the Kirk Ranch in Greenwood County, and was raised on the ranch with one younger... View Obituary & Service Information

The family of Joan Etta (Kirk) Gryder created this Life Tributes page to make it easy to share your memories.

Send flowers to the Gryder family.