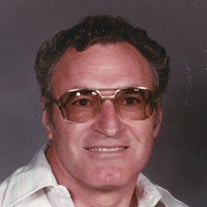 Jim Walker of Eureka, died on June 18, 2021, at his home at Eureka Lake, at the age of 86. He was born on December 14, 1934, in Anthony, Kansas, the son of Roy Lee and Alice Elizabeth (Mooring) Walker. He was raised in Anthony and attended local schools, graduating with the Class of 1953. On August 22, 1954, Jim was united in marriage to Patricia Ann Longbine, in Anthony. They made their home in McPherson. To this union, two children were born. Jim attended McPherson College and later Wichita State University. He earned his Master’s in Education and began as a teacher in Wheaton, Kansas. He later was a teacher at Kechi, Shawnee Mission East, and Holton, before the family settled in Eureka. Jim spent 27 years in the Eureka school system as a high school counselor and track coach. He retired in the early 90s and he and Patricia traveled all across the country, visiting every state. Jim will be remembered as an ardent reader, often completing entire books in a day. He also loved woodworking, canoeing, drawing, and Masters Track. He was a member of the Jefferson Street Baptist Church. He is survived by his wife, Patricia of the home; children: Dee Ann and husband, Rick Schneble of Alvin, Texas; and Jimmie Wayne Walker of Alvin, Texas; foster daughter, Linda and husband, Glenn Smith of Donaldson, Arkansas; one granddaughter, Jasmine Nicole Walker of Iola, Kansas; three siblings: Rosie and husband, Bob Besore of New Braunfels, Texas; Johnie and wife, Mary Ann Walker of Castle Rock, Colorado; and Betty Hawley of Carmen, Oklahoma; sisters-in-law, Frances Walker of Anthony, and Janell Walker of Georgetown, Texas; and a great many nieces and nephews. He was preceded in death by his parents; granddaughter, Kristy Snow Walker; and five siblings: Lee Roy Walker, Jack Walker, Edward Walker, Mildred Davison, and Robert Walker. Memorial services will be held at 2:00 P.M., Saturday, June 26, 2021, at Koup Family Funeral Home, in Eureka with Pastor John Craighead of the Jefferson Street Baptist Church officiating. Cremation has been effected. Inurnment will follow at Greenwood Cemetery, Eureka. In lieu of flowers, the family requests that memorials be made to the Coach Walker Memorial Scholarship or to the Jefferson Street Baptist Church. Contributions may be sent in care of Koup Family Funeral Home, PO Box 595, Eureka KS 67045, which is overseeing arrangements. Condolences may be left for the family online, at koupfunerals.com.

Jim Walker of Eureka, died on June 18, 2021, at his home at Eureka Lake, at the age of 86. He was born on December 14, 1934, in Anthony, Kansas, the son of Roy Lee and Alice Elizabeth (Mooring) Walker. He was raised in Anthony and attended... View Obituary & Service Information

The family of Jim Walker created this Life Tributes page to make it easy to share your memories.

Send flowers to the Walker family.