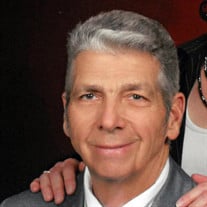 Jim C. Smith of Eureka, died on Sunday, May 17, 2020 at Ascension Via Christi St. Francis, in Wichita, at the age of 76. He was born on November 6, 1943, in Winfield, Kansas, the son of Merrill “Ralph” and Frances “DeEtta” (Burres) Smith. He was raised in Howard attending local schools. He graduated in Howard with the Class of 1961. He began working at AT&T laying fiberoptic cable. In all he worked at AT&T for nearly twenty years doing a variety of jobs in a variety of places. On May 31, 1963, Jim was united in marriage to Barbara Jo Light in Wichita. To this union, three daughters were born. They made their home in various cities until settling in Lathrop, Missouri in 1973. There he opened BJs Cakes and Things with Barbara. In 1981, they moved to Eureka. They operated the bakery on Main Street in Eureka for six years. Jim later worked at Eureka Federal and Fashion, Inc in Ottawa. Starting in the early 2000’s, Jim was no longer able to work due to his health. He was a member of the First United Methodist Church, Fidelity Lodge #106, the Midian Shrine, and the Midian Antique Autos Club. He is survived by his wife, Barbara of the home; one daughter, Brandi LaNai Toney of Pauls Valley, Oklahoma; seven grandchildren: Shaun Anderson, Kurtis Anderson, Katelyn Peacock, Kimberly Peacock, Timothy Luster, Adrienne Hollis, and Karrissa Tanton; two great-grandchildren, Everly Ann Tanton and Nora Rose Hollis; three siblings: Carolyn and husband, Wallace Ratzliff of Sonora, California; Lewis and wife, Carolyn Beaumont of Gardner, Kansas; and Teresia and husband, Mike Wussow of Haysville, Kansas; son-in-law, Ryan Peacock; and numerous nephews and nieces. He was preceded in death by his parents; daughter, Kandi LaKai Peacock; and an infant daughter. Funeral services will be held at 2:00 P.M., Thursday, May 21, 2020, at Grace Lawn Cemetery Pavilion, Howard, with Pastor Warren Olson officiating. Interment will follow at Grace Lawn Cemetery. Visitation will be held from 1 – 2 PM,immediately preceding the service. In lieu of flowers, the family has requested that memorials be made to Shriners Hospital for Children. Contributions may be sent in care of Koup Family Funeral Home, P.O. Box 595, Eureka, KS 67045, which is overseeing arrangements. Condolences may be left for the family online, at koupfunerals.com.

The family of Jim C. Smith created this Life Tributes page to make it easy to share your memories.