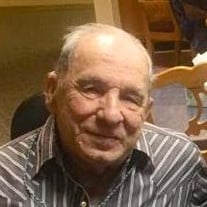 Jerry Leroy Tally of Eureka, Kansas, passed away on February 6, 2022, at the Greenwood County Hospital in Eureka, at the age of 85. He was born January 21, 1937, in Miami, Oklahoma, the son of Roy Wilbur and Martha Emma (Landis) Tally. He was raised in Joplin and Baxter Springs before moving to Neodesha. Jerry graduated from Neodesha High School with the class of 1956. After graduation, Jerry served in the Active Army National Guard, serving in Fort Carson, Colorado, and in Missouri. After the Reserves, he attended trade school in Kansas City, Missouri. He later went to work at the State Hospital in Winfield, working as a Med Aid Supervisor. He retired from the State Hospital in 1993 with 31 years of service. Jerry mowed lawns in his free time before and long after his retirement. He enjoyed bowling league for many years and enjoyed playing dominos in his later years. Although Jerry’s vision prevented him from obtaining a driver’s license, that didn’t stop him from leading a full and adventurous life, from riding his Indian motorcycle for many years, to the moped he rode well into his 60’s, and anyone close to Jerry knew just how fast a power chair would go! Jerry was united in marriage to Judith Goldwater on January 21, 1967, in Winfield, Kansas. She preceded him in death in 2001. He is survived by his two nieces, Donna Olson and husband Keith, of Eureka, Kansas; Diane Gassaway and husband, Carl of El Dorado Hills, California; two great-nieces and two great-nephews. He was preceded in death by his parents; wife, Judy; sister, Janet Gulick; and nephew, Richard “Dick” Snavely. Cremation has been effected. A private family inurnment will take place at Oxford Cemetery, Oxford, Kansas at a later date. Condolences may be left for the family online, at koupfunerals.com.

Jerry Leroy Tally of Eureka, Kansas, passed away on February 6, 2022, at the Greenwood County Hospital in Eureka, at the age of 85. He was born January 21, 1937, in Miami, Oklahoma, the son of Roy Wilbur and Martha Emma (Landis) Tally. He... View Obituary & Service Information

The family of Jerry Leroy Tally created this Life Tributes page to make it easy to share your memories.

Jerry Leroy Tally of Eureka, Kansas, passed away on February...

Send flowers to the Tally family.