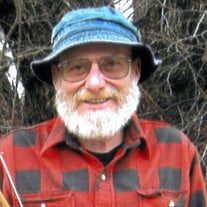 Jerry Joe Gamblian, of Eureka, died Friday, June 10, 2022, at his home in Eureka, at the age of 68. He was born August 31, 1953, in Eureka, the son of Harry Eugene “Gene” and Donna Joan (Newlon) Gamblian. He was raised in Eureka and attended local schools, graduating from Eureka High School with the class of 1971. Following graduation, he joined the Air Force where he served from 1971 – 1975. He was stationed in Spain and Italy as a weapons mechanic and armament installer, during the Vietnam era. Upon returning to Eureka, Joe ran a mechanic shop on State Street and served as a mail carrier for the United States Post Office. He retired in 2009 after more than 23 years of service to the postal service. Upon retirement, Joe loved to be at the lake water skiing or boating, spending time with family and friends, and working with his hands; whether he was building machines or other things. Joe is survived by his Uncle Larry and wife, Glenna Gamblian of Emporia, Kansas; nephew Ben Gamblian of Leoti, Kansas; niece Angie and husband, Jamie Huske of Ottawa, Kansas; and two grand-nieces: Kaylee and Alexis Huske; and other cousins. He was preceded in death by his parents; a brother Jim Gamblian; and a sister, Jan Gilham. Cremation has been effected. A Celebration of Life will be held from 4:00 P.M. to 7:00 P.M., Thursday, June 23, 2022, at the Matt Samuels Community Building in Eureka. In lieu of flowers, the family has requested that memorial donations be made to the Wild Kansas Association. Contributions may be sent in care of Koup Family Funeral Home, P O Box 595, Eureka, Kansas 67045, which is overseeing arrangements. Online condolences may be left for the family at koupfunerals.com

The family of Jerry Joe Gamblian created this Life Tributes page to make it easy to share your memories.

Send flowers to the Gamblian family.