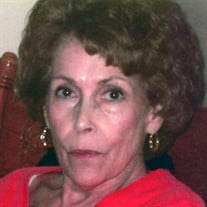 Jerry Ann Clites of Eureka, died on Sunday, November 15, 2015, at the Eureka Nursing Center, in Eureka, at 74. She was born on August 18, 1941, in Waco, Texas, the daughter of Jesse and Wyatt Elizabeth “Tillie” (Robinson) Byrd. She was raised in Eureka, and graduated from Eureka High School. On May 23, 1959, she was united in marriage to Jerry Dee Clites in Eureka, where they made their home. Jerry was very active in her church as a Sunday school teacher, and enjoyed golfing at the country club. Jerry preceded her in death on May 31, 2006 She was a member of the First Baptist Church of Eureka. She is survived by one son, Jimmy of Eureka; and one granddaughter, Jamie Clites. She was preceded in death by her parents; husband; son, Ronald; two daughters, Lisa and Jodie; and one grandson. Funeral services will be held at 1:00 P.M., Tuesday, November 17, 2015 at Koup Family Funeral Home in Eureka with Pastor Robert Nacci of the First Baptist Church officiating. Interment will follow at Greenwood Cemetery. In lieu of flowers, the family has requested that memorials be made to the Eureka Nursing Center. Contributions may be sent in care of Koup Family Funeral Home, P.O. Box 595, Eureka, KS 67045, which is in charge of service arrangements.

The family of Jerry Ann Clites created this Life Tributes page to make it easy to share your memories.

Send flowers to the Clites family.