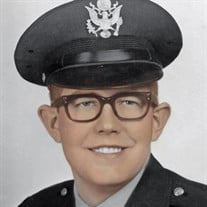 Major Jay Wilks Cowan of Gilbert, Arizona, died in August of 2020 in Gilbert, Arizona at the age of 76. He was born in May of 1944, in Hutchinson, Kansas, the son of Clarence “Bus” Ridenour Cowan and Mary Evelyn (Wilks) Cowan. Jay, a graduate of Emporia High School in 1962, went on to attended Emporia State University earning a bachelor’s degree in Mathematics and Physics, and later received his MBA from Webster University. On August 28, 1966, Jay was united in marriage to Janet Louise Stapleford in Emporia, Kansas. They traveled the world following Jay's military career until they retired in Phoenix, Arizona. Jay and Janet were married for 37 years as Janet preceded him in death in December, 2012. Jay served for 21 years in the Air Force as a Computer Systems Officer and also as a War Plans Officer, retiring with military honors. He received the Air Force Outstanding Unit Award along with a National Defense Service Medal. Jay was a member of the St. Matthew United Methodist Church of Mesa, Arizona, and Emporia #12 Masonic Lodge. Jay was preceded in death by his wife and both parents. He is survived by his children, Paula Jill and her husband, Tyler Dumas, of Gilbert, Arizona; and son Christopher and his wife, Amanda Cowan of Queen Creek, Arizona; and seven grandchildren: Kelsey, Tanner, Kylie, Peyton, Grayson, Parker, and Amelia. Graveside services will be held at 11:00 AM, Tuesday, September 8, 2020 at Greenwood Cemetery, Eureka, with Pastor Jim Stapleford officiating. Please wear a mask. In lieu of flowers, the family requests that memorials be made to the AZ PBS. Contributions may be sent in care of Koup Family Funeral Home, P.O. Box 595, Eureka, KS 67045, which is overseeing arrangements. Condolences may be left for the family online, at koupfunerals.com.

The family of Jay Wilks Cowan created this Life Tributes page to make it easy to share your memories.

Send flowers to the Cowan family.