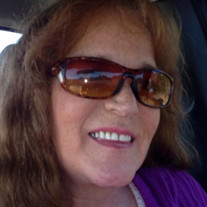 Jari Jo (Mayer) Williams of Eureka, died on Saturday, May 14, 2016 at Wesley Woodlawn Hospital, in Wichita, at the age of 54. She was born on December 17, 1961, in Great Bend, the daughter of Clayton and Shirley (Thackeray) Rockhill. She was raised in Great Bend and later Garden City where she graduated and later attended community college majoring in cosmetology. On April 15, 1978, she was joined in marriage to Michael Pracht. They made their home in Garden City. To this union, their only daughter was born. The marriage later ended in divorce, yet they remained friends for the next 37 years. Jari moved all around the country living in many states including Texas, Arkansas, Mississippi, Arizona, Nevada, and 8 years in Oregon, before returning to Kansas and moving to Eureka in 2013, to be closer to her family. Jari was a breast cancer survivor before the age of 25, and a quadruple bypass survivor at 44. She suffered many struggles including addiction, but overcame her battles and was PROUDLY clean for 16 years, until her death. Her greatest enjoyment was spending time with her grandsons. She is survived by her daughter, Tara Lynn Pelaccio of Larned; two grandsons, Dominic Christian Pelaccio and Michael Angelo Pelaccio; one brother, Ed and wife, Renee Mayer of Arkansas City; and her aunt June (Thackeray) Addison of Eureka. She was preceded in death by her parents. Cremation has been effected. Her ashes will be released in Pikes Peak, Colorado, in a vigil yet to be scheduled. In lieu of flowers, the family requests that memorials be made to Autism Speaks, in honor of her grandsons. Contributions may be sent in care of Koup Family Funeral Home, P.O. Box 595, Eureka, KS 67045, which is in charge of service arrangements.

Jari Jo (Mayer) Williams of Eureka, died on Saturday, May 14, 2016 at Wesley Woodlawn Hospital, in Wichita, at the age of 54. She was born on December 17, 1961, in Great Bend, the daughter of Clayton and Shirley (Thackeray) Rockhill. She was... View Obituary & Service Information

The family of Jari Jo Williams created this Life Tributes page to make it easy to share your memories.