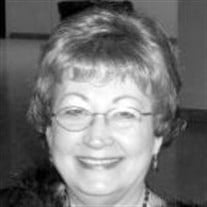 Janice Marlene Escareno, of Eureka, Kansas, went to her heavenly home on Tuesday, August 23, 2016, at Greenwood County Hospital in Eureka, at the age of 76. She was born on July 9, 1940, in Eureka, Kansas, the daughter of Willis G. “Bud” and June Arlora (Ford) Samuels. She was raised in Eureka and graduated from Eureka High School. On July 23, 1960, Janice was united in marriage to Howard “Doug” Eddings in Eureka, where they made their home. They later lived in El Dorado and then came back to Eureka. This marriage ended in divorce in 1978. Janice began working at Greenwood County Hospital as a candy striper and later became a nurse’s aide. Eventually she became the ward supervisor before her retirement. Overall she spent over fifty years at the hospital. On September 25, 1982, Janice was united in marriage to Ed Escareno in Eureka. He preceded her in death on May 17, 2015. She was a member of the Baptist church, and the VFW Ladies Auxiliary. She is survived by four daughters, Tami Jackson of Eureka; Brenda Stewart of Eureka; Leann Eddings of Eureka; and Amy Brown of Eureka; six step-children, Teresa Escareno of Eureka; Roberta Hawthorne of Eureka; Katherine Neel of Oxford, Ohio; John Escareno of Eureka; Tom Escareno of Eureka; and Richard Escareno of Madison; 9 grandchildren; 13 step-grandchildren; 10 great-grandchildren; 24 step-great-grandchildren; one brother, Harold Samuels of Andover; and one sister, Sharon Clark of Eureka. She was preceded in death by her parents; husband; son-in-law, John Jackson; step-daughter, Lucy Escareno; and brother, Gilford Samuels. Memorial services will be held at 2:00 P.M., Friday, September 2, 2016, at Koup Family Funeral Home, with Minister Lana Osborn and Pastor Jerry Clark officiating. Cremation has been effected. Visitation hours are set from 5:00 P.M. to 7:00 P.M., Thursday, September 1, at the funeral home. In lieu of flowers, the family has requested that memorials be made to the Janice Escareno Memorial Fund. Contributions may be sent in care of Koup Family Funeral Home, P.O. Box 595, Eureka, KS 67045, which is in charge of service arrangements. Condolences may be left for the family online at koupfunerals.com.

The family of Janice M. (Samuels) Escareno created this Life Tributes page to make it easy to share your memories.

Janice Marlene Escareno, of Eureka, Kansas, went to her heavenly...

Send flowers to the Escareno family.