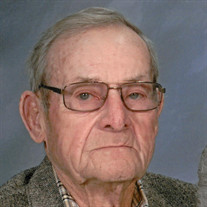 James August “Jim” Meng of Severy, died on Saturday, November 25, 2017 at his home near Severy, at the age of 91. He was born on July 31, 1926, in Waterloo, Kansas, the son of Louis and Mary (Rohling) Meng. On April 14, 1948, Jim was united in marriage to Claudine Hrencher in Sharon, Kansas. Jim served in the United States Army as a medical technician in Japan and the Phillipines during World War II. He was a stockman and farmer. He retired from the Robert J. Dole VA Medical Center. His biggest enjoyment after retirement was taking care of his cattle. He was a member of Sacred Heart Catholic Church in Eureka, VFW Post #2712, and the Knights of Columbus. He is survived by his wife, Claudine of the home; four children, Vic Meng of Severy; Delbert Meng of Severy; Glenn and wife, Laurie Meng of Goddard; and Delores and husband, Finley Nevin of Latham; daughter-in-law, Christy Meng of Goddard; nine grandchildren: Grant, Renee, Justin, Lindsay, Kendra, Krista, Brock, Jason, and Abbey; and eighteen great-grandchildren; one brother, Joe Meng of Kingman; and four sisters, Irene Martin of Harper; Marie Martin of Augusta; Helen Burgess of Wichita; and Betty Buhrman of Schulte. He was preceded in death by his parents; son, Vernon Meng; grandson, Neil Nevin; three brothers, Victor Meng, Sylvester “Butch” Meng, and Eugene Meng; and sisters, Mildred Dick; and Virginia Hrencher. Funeral mass will be held at 10:30 A.M., Wednesday, November 29, 2017 at Sacred Heart Catholic Church in Eureka with Father Stephen Gronert officiating. Interment will follow at Greenwood Cemetery, Eureka. Visitation hours are set from 5:00 P.M. to 6:30 P.M., Tuesday at the church. Rosary recitation will follow. In lieu of flowers, the family has requested that memorials be made to the Sacred Heart Altar Society or to Harry Hynes Memorial Hospice. Contributions may be sent in care of Koup Family Funeral Home, P.O. Box 595, Eureka, KS 67045, which is overseeing arrangements. Condolences may be left for the family online, at koupfunerals.com.

The family of James August Meng created this Life Tributes page to make it easy to share your memories.

Send flowers to the Meng family.