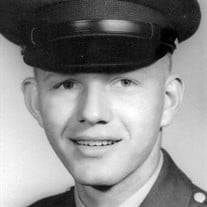 It is with great sadness that the family of Retired Master Sergeant James I. “Jim” Griffitts announce his passing on August 29, 2021, in Abilene, Texas, due to complications of COVID-19. Jim was born to Lendon D. “Slim” and Lucy (Wood) Griffitts on May 7, 1942, in Eureka, Kansas. Jim was united in marriage to his beloved wife, Elli (Korell) Griffitts on June 21, 1963. They are proud parents to their five children, Karin (Griffitts) Pugh, Silvia (Griffitts) Stratton, Marie (Griffitts) Rowell, James D. Griffitts, and Rick Griffitts. Jim grew up in Eureka, graduating from Eureka High School in 1960. Coming from a family who valued service to one’s country and community, he proudly enlisted in the United States Army in 1961. He attended basic training in Fort Riley, Kansas. While stationed in Kriegsfeld, Germany, he met his wife, Elli, and started a family. Throughout his service, he and the family were stationed in military bases in Giessen, Germany; Camp Roberts, California; Okinawa, Japan; Fort Lee, Virginia; and Fort Riley, Kansas. One of the proudest moments in his military career was when he was stationed in Egypt to help train the Egyptian military. While he valued his time serving his country abroad, he also honored his country by being involved in his local community. While living in Eureka, he was a devoted member of the American Legion and Fidelity Lodge 106. He enjoyed spending time with his family. James was an avid outdoorsman and loved ranching and fishing. He is survived by his daughters, Karin Pugh of El Dorado; Silvia and husband, Mike Stratton of Rose Hill; Marie Rowell of El Dorado; sons, James and wife, Shawna Griffitts of Eureka; and Rick Griffitts of Valley Center; sister, Carol and husband, Phil Barnes of Eureka; eight grandchildren; three great-grandchildren; and many nieces and nephews. Jim is preceded in death by his parents, Lendon and Lucy; his loving wife, Elli; his sisters Betty and husband, Bob Bahr; and Mary and husband, Frank Husack; his granddaughter, Sally Rowell, and his son-in-law, Colin Rowell. Graveside services will be held at 2:00 P.M., Saturday, September 11, 2021, at Greenwood Cemetery, Eureka with Pastor Jerry Clark officiating. In lieu of flowers, the family requests that memorials be made to the Leukemia & Lymphoma Society. Contributions may be sent in care of Koup Family Funeral Home, PO Box 595, Eureka KS 67045, which is overseeing arrangements. Condolences may be left for the family online, at koupfunerals.com.

The family of James Ira Griffitts created this Life Tributes page to make it easy to share your memories.

It is with great sadness that the family of Retired Master Sergeant...

Send flowers to the Griffitts family.