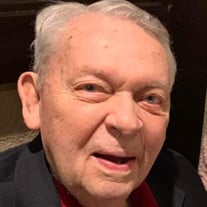 James Henry Francis was born Oct. 28th, 1928 in Emporia, Kansas and died December 16th, 2021 at Homestead of El Dorado at the age of 93. When he was seven years old his parents, Joseph T. and Nina Glasgow Francis, moved to Eureka, Kansas where he lived most of his life. Henry graduated from Eureka High School in 1947 and from Alabama Polytechnic Institute (Auburn University) in 1951. After working for a year on his uncle’s ranch near Perryton, Texas, he returned to Eureka to work for his father in the plumbing and heating business. Then he worked for several years at the Campbell Funeral Home, spent a few years selling renovated homes and finally became an EMT and served as assistant director for Greenwood County EMT Services until retirement. He also taught EMT classes in several counties in Kansas. Henry served the community as the Mayor of Eureka for two terms and on the boards of the Museum, Eureka library and state library. On June 7th,1950, he married Martha Ann Shaw and three children were born to this union. As an accomplished organist, Henry often played for the churches of Eureka as needed. His greatest joy was praising God through music. He was organist at Christ Lutheran Church as well as a member for fifty years. For the past several years, Henry enjoyed stained glass artwork. He created and installed stained glass windows for Greenwood County Museum, Christ Lutheran Church bell tower room and Eureka library as well as numerous individual pieces. Henry was preceded in death by his parents, a daughter, three brothers, two nephews and one grandson. Those mourning his death are his wife Martha, two sons Stephen and wife Sue of El Dorado, and Stewart of Ponca City, OK., eight grandchildren, fifteen great grandchildren and one great, great grandchild, and brother David and wife Berta of Lincoln, Nebraska and several nephews and nieces Ȧ Memorial service will be held at Christ Lutheran Church in Eureka on Wednesday the 29th of December at 10:30 a.m. with Pastor Tim Carey officiating. If desired, memorials may be given to Christ Lutheran Church PO Box 347 Eureka, Kansas 67045.

James Henry Francis was born Oct. 28th, 1928 in Emporia, Kansas and died December 16th, 2021 at Homestead of El Dorado at the age of 93. When he was seven years old his parents, Joseph T. and Nina Glasgow Francis, moved to Eureka, Kansas where... View Obituary & Service Information

The family of Henry Francis created this Life Tributes page to make it easy to share your memories.

Send flowers to the Francis family.