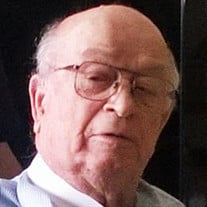 Jacobus Gerardus “Jake” Borst of Valley Center, KS, died Sunday, November 18, 2018, at Eureka Nursing Center in Eureka, at the age of 87. He was born, December 21, 1930, in Voorhout, Holland, the son of Walter and Elizabeth (Vanwinsen) Borst. He attended school in Holland, before moving to America in 1956. He resided in Eureka then moved to California for one year, finally returning to Kansas. He worked for the City of Wichita in the greenhouse for seven years. Jake purchased the Livingston’s Garden Center in North Wichita in 1964 from his brother John, which he ran until he sold it and moved to a farm in rural Butler County to become a cattleman. In April 1969, Jake was united in marriage to Lauretta (Mitchell) Aldrich in Wichita. Lauretta preceded him in death in September 2001. He continued to ranch until he retired and moved to Valley Center. When his health began to fail, he moved to assisted living. Jake attended St. Jude’s Catholic Church in Wichita. He is survived by two step-daughters: Elaine Snow of Olympia, WA, and Dianne Coleman of Eureka; three grandchildren; four great-grandchildren; and five siblings: Maria Vandendam of Ontario, Canada, Wouter Borst of England, John Borst of Eureka, and Pete Borst of England; and numerous nieces and nephews. He was preceded in death by his parents; wife Lauretta; and six siblings: Leonardus, Catharina, Adrianus, Cornelius, Elizabeth, and Ida. Memorial Mass is set for 11:00 A.M., Tuesday, November 27, at Sacred Heart Catholic Church in Eureka, with Father Stephen Gronert officiating. Rosary Recitation will begin at 10:30 A.M. Inurnment will take place at a later date. Cremation has been effected. In lieu of flowers the family has requested that memorials be made to the Greenwood County Hospital. Contributions may be sent to Koup Family Funeral Home, P O Box 595, Eureka, KS 67045, which is overseeing arrangements. Condolences may be left for the family online, at koupfunerals.com.

The family of Jacobus Gerardus "Jake" Borst created this Life Tributes page to make it easy to share your memories.

Send flowers to the Borst family.