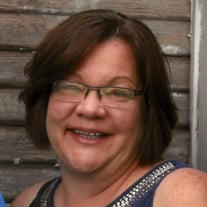 Jackie Leann (Messick) Pryce of Eureka, died on Wednesday, January 24, 2018 at Salina Regional Health Center in Salina, at the age of 56. She was born on July 10, 1961, in Lyons, the daughter of Jack and Margaret (Taylor) Messick. She was raised in Raymond,and graduated from Chase High School with the class of 1979 and Dodge City Community College in 1982. She later attended Cliff Mann School of Floral Design in Denver, Colorado. She worked in Kansas City and later moved to Eureka. On July 30, 1994, Jackie was united in marriage to Floyd Duane Pryce in Eureka. They made their home in Eureka and to this union, two children were born. This marriage later ended in divorce. Jackie worked at Loretta’s floral shop in Eureka for over ten years and she later worked at the Greenwood County Hospital. She was a member of the Raymond Baptist Church in Raymond. Jackie will be remembered for her heart of gold and as a loving mother, daughter, sister, aunt, and friend. Her life revolved around her boys and she was mother to many of their friends. She is survived by her sons, Brandon Pryce of Eureka; and Grayson Pryce of Eureka; parents, Jack & Lea Messick of Great Bend; and Margaret Doll of Eureka; siblings, Fred and wife, Debbie Messick of Valley Center; Bo Messick of Ellinwood; and Cathy and husband, Danny Coon of Eureka; numerous nephews and nieces, many friends, and the Man Cave Boys. Funeral services will be held at 2:00 P.M., Thursday, February 1, 2018 at Koup Family Funeral Home with Mr. Jayme A. Koup officiating. Interment will follow at Greenwood Cemetery, Eureka. Visitation hours are set from 5:00 P.M. to 7:00 P.M., Wednesday, at the funeral home. In lieu of flowers, the family has requested that memorials be made to the Jackie (Messick) Pryce Memorial Fund. Contributions may be sent in care of Koup Family Funeral Home, P.O. Box 595, Eureka, KS 67045 which is overseeing arrangements. Condolences may be left for the family online, at koupfunerals.com.

Jackie Leann (Messick) Pryce of Eureka, died on Wednesday, January 24, 2018 at Salina Regional Health Center in Salina, at the age of 56. She was born on July 10, 1961, in Lyons, the daughter of Jack and Margaret (Taylor) Messick. She was... View Obituary & Service Information

The family of Jackie Leann Pryce created this Life Tributes page to make it easy to share your memories.

Send flowers to the Pryce family.