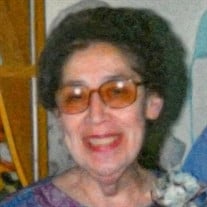 Irene Amparo Bonilla, of Wichita, Kansas, died on Tuesday, October 25, 2016, at Harry Hynes Memorial Hospice in Wichita, at the age of 79. She was born on May 10, 1937, in Howard, Kansas, the daughter of Anastasio and Francisca (Martinez) Arguelles. She was raised in Eureka and graduated from Eureka High School. After, graduation she attended University of Saint Mary in Salina, completing a Bachelor’s Degree in Education. While in college, she took vows and entered the convent of the Sisters of Saint Joseph in Concordia, Kansas as Sister Maria Francisca. After completing her degree, she taught elementary all around the state. She later left the convent for health reasons in the late 1960’s. On June 6, 1970, Irene was united in marriage to Jesse AcenciÓn Bonilla in Eureka. They made their home in Wichita. He preceded her in death on October 29, 2002. She was a member of Saint Margaret Mary Catholic Church of Wichita. She is survived by two step-children, J.G. Bonilla of California; and Melina Bonilla of California; five sisters, Petra Walker of Fort Worth, TX; Judy Arguelles of Eureka, KS; Donna Escareno of Wichita, KS; Pauline Arguelles of Eureka, KS; and Connie Murillo of Wichita, KS; and numerous nephews and nieces. She was preceded in death by her parents; husband; four brothers: Celso Arguelles; Raymond Arguelles, Celso Arguelles, Joseph Arguelles; and two sisters, Delfina Brown, Maria Ortiz. Mass of Christian Burial will be held at 11:00 A.M., Saturday, October 29, 2016 at Sacred Heart Catholic Church with Father Stephen Gronert officiating. Interment will follow at Greenwood Cemetery, Eureka, KS. Rosary recitation will begin at 10:30 A.M. In lieu of flowers, the family has requested that memorials be made to the Harry Hynes Memorial Hospice or to the Sacred Heart Catholic Church. Contributions may be sent in care of Koup Family Funeral Home, P.O. Box 595, Eureka, KS 67045, which is overseeing service arrangements. Condolences may be left for the family online at koupfunerals.com.

Irene Amparo Bonilla, of Wichita, Kansas, died on Tuesday, October 25, 2016, at Harry Hynes Memorial Hospice in Wichita, at the age of 79. She was born on May 10, 1937, in Howard, Kansas, the daughter of Anastasio and Francisca (Martinez) Arguelles.... View Obituary & Service Information

The family of Irene Amparo Bonilla created this Life Tributes page to make it easy to share your memories.

Send flowers to the Bonilla family.