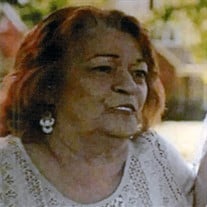 Helen Marguerite “Margie” Stubbs of Eureka, died Wednesday, July 18, 2018 at Greenwood County Hospital in Eureka, at the age of 76. She was born August 30, 1941 in Eureka, the daughter of Tommy and Helen (Watchous) Brown. She was raised in the Madison, Hamilton, and Eureka areas, attending grade school at the Seely School and Madison, and high school in Hamilton. Following her schooling Helen married and devoted her life to raising her six children. As the children grew up, Helen worked first in construction and later as an over-the-road truck driver. She moved to Eureka in 2006 and retired. She spent her time fishing and taking care of her pets. Helen is survived by five children: Lewis Lee Wygle of El Dorado, KS; Brent Wygle of Eureka; Bradley Wygle of Wichita, KS; Tracy Bailly of Derby, KS; and Tonya Sanchez of Winfield, KS; eight grandchildren; numerous great-grandchildren; one brother John Brown of Garnett, KS; and two sisters: Laura McCoy of Neal, KS; and M. Christine Bales of Cottonwood Falls, KS. She was preceded in death by her parents, a daughter Shawnda Diaz, and one brother, Tommie Brown. Graveside services will be held at 10:00 A.M., Friday, July 20, at Neal Cemetery in Neal, KS with Pastor Larry Evans of the Neal Evangelical Free Church officiating. In lieu of flowers the family has requested that memorial donations be made to Heartland Hospice. Contributions may be sent in care of Koup Family Funeral Home, P O Box 595, Eureka, KS 67045, which is overseeing arrangements. Condolences for the family may be left online at koupfunerals.com

The family of Helen Marguerite "Margie" Stubbs created this Life Tributes page to make it easy to share your memories.

Send flowers to the Stubbs family.