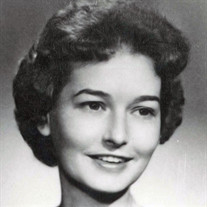 Hazel Caroline Morse A devoted wife and mother, Hazel Morse passed away at her home in Bryan, Texas on Friday, September 9, 2016. She was 84 years old. Born in Eureka, Kansas, on November 24, 1931, Hazel grew up in Greenwood County, Kansas. Her father, Ralph Britton Rice, was a farmer, while her mother, Nelly Sarah (Briggs) Rice, was a teacher who also tended her children, home and the family farm (The Rice family was descended from some of the country’s first immigrants—arriving here in 1636—and helped to found three colonial towns.). Hazel was one of nine siblings including: Homer Rice, Dale Rice, Erma Rice, Fern (Rice) Cook, Norman Rice, Margie (Rice) Hoover, Jack Rice, and Jeannie (Rice) Hughes. Hazel graduated as Valedictorian of her class at Climax Springs High School. She went on to receive her Bachelors in Education (Summa Cum Laude) from Missouri Valley Presbyterian College. In 1949, Hazel met and married Pat Hughes, and later gave birth to son, Michael Kent Hughes (deceased in 2010). The marriage ended in 1951; Hazel married Jack Morse in 1955 (in Atchison, Kansas). They had a son, Thomas Craig Morse, in 1957 and their union spanned 46 years, ending only with Jack’s death in 2001. They worked together for 30 years as she kept the accounts for their small business. From 1966-1975, she worked as a social worker for the State of Missouri and was tasked with interpreting all federal rules and regulations for her office. Remembering Hazel now are her son and daughter-in-law, Tom & Pat Morse of Bryan, Texas; her stepson, David and his wife, Donna Jo Smith of Aniston, Alabama; her “adopted in-laws”: Peggy, Dave & Alex Mann and Sue Diehl; her sisters, Fern and Jeannie; brother-in-law, Warren and wife, Marilyn; as well as Hazel’s grandsons, Andrew and wife, Braly Morse and Brynden Hughes. She is survived also by her great-grandson, Bryce Morse; her nieces, nephews, great-nieces and great-nephews. Hazel was predeceased by her husband, Jack; her son, Michael; six of her siblings; and her parents. Memorial services will be held at 11:00 A.M., Saturday, September 17, 2016 at Koup Family Funeral Home, in Eureka. In lieu of flowers, the family has requested that memorials be made to the Hospice Brazos Valley. Contributions may be sent in care of 502 W. 26th St., Bryan, 77803 as a way to both honor Hazel’s memory and the exemplary care rendered.

Hazel Caroline Morse A devoted wife and mother, Hazel Morse passed away at her home in Bryan, Texas on Friday, September 9, 2016. She was 84 years old. Born in Eureka, Kansas, on November 24, 1931, Hazel grew up in Greenwood County, Kansas.... View Obituary & Service Information

The family of Hazel Caroline (Rice) Morse created this Life Tributes page to make it easy to share your memories.

Send flowers to the Morse family.