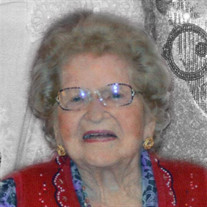 Hazel Bernice McDonald, of Eureka, Kansas died Thursday, January 19, 2017, at Eureka Nursing Center in Eureka, at the age of 98. She was born January 24, 1918, on a farm southeast of Eureka, the daughter of Arthur Lee and Lettie (Strimple) Guisinger. Hazel was raised on the farm and attended Hallet and Burkton Schools. On March 6, 1937, Hazel was united in marriage to Edward Kendall McDonald in Eureka, Kansas. They made their home on a farm southeast of Eureka. To this union, four children were born. After 63 years of marriage, Ed preceded her in death on January 21, 2002. Hazel was a member of the First United Methodist Church of Eureka, the VFW Ladies, and Goldstar Moms. She was an excellent cook, and enjoyed bowling and spending time with friends at the Eureka Senior Center. She was an avid KU fan and loved to watch games on TV. She is survived by two sons: Charles R. McDonald of Arkansas City, Kansas, and Art McDonald of Eureka; six grandchildren: Craig McDonald, Mike McDonald, David McDonald, Lisa McDonald, Jeremy Gibson, and Christina Patterson; 10 great-grandchildren; and four great-great grandchildren. She was preceded in death by her parents; husband Edward; one son Danny Lee McDonald; one daughter Sheila Gibson; two sisters, Olive Brown and June Smith; and one brother Warren Guisinger. Funeral services will be held at 11:00 A.M., Tuesday, January 24, 2017, at the First United Methodist Church in Eureka, with the Reverend Kenneth A. Baker officiating. Interment will follow at Greenwood Cemetery. In lieu of flowers the family has requested that memorials be made to the Eureka Nursing Center or to Friendship Meals. Contributiions may be sent to Koup Family Funeral Home, P.O. Box 595, Eureka, Kansas 67045, which is overseeing funeral arrangements. Condolences may be left online for the family at koupfunerals.com.

Hazel Bernice McDonald, of Eureka, Kansas died Thursday, January 19, 2017, at Eureka Nursing Center in Eureka, at the age of 98. She was born January 24, 1918, on a farm southeast of Eureka, the daughter of Arthur Lee and Lettie (Strimple)... View Obituary & Service Information

The family of Hazel Bernice McDonald created this Life Tributes page to make it easy to share your memories.

Send flowers to the McDonald family.