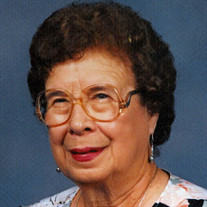 Wilma “Harriet” Shumard of Eureka, died on Friday, June 10, 2016 at the Eureka Nursing Center, in Eureka, at the age of 94. She was born on June 13, 1921, in Hamilton, the daughter of Theodore and Theresa (Groom) French. She was raised in Eureka and graduated from local schools. She worked in Wichita after graduation. On April 11, 1948, Harriet was united in marriage to Guy Myrl Shumard in Madison. They made their home in Eureka. Harriet clerked for the probate judge in Eureka and was later herself elected to District Magistrate Judge for the 13th District, serving three terms and retiring on February 1, 1985. She was a member of the Christian & Congregational Church of Eureka, and a 50-year member of Golden Rod Chapter 163, Order of the Eastern Star of Yates Center, and was an active 4-H Leader with Guy for many years. She is survived by one brother, Ted French of Atlanta, Georgia; and numerous nephews and nieces. She was preceded in death by brothers, Marvin “Sonny” French, Lyle French, Willard French, and Herbert “Bud” French; and sisters, Helen Keller, Margaret Love, Dorothy Uhl, and Eva Jean Boswell. Funeral services will be held at 10:00 A.M., Wednesday, June 15, 2016 at the Christian & Congregational Church in Eureka with Pastor Howard Bever officiating. Interment will follow at Greenwood Cemetery. In lieu of flowers, the family has requested that memorials be made to the Eureka Nursing Center or to the Christian & Congregational Church. Contributions may be sent in care of Koup Family Funeral Home, P.O. Box 595, Eureka, KS 67045, which is in charge of service arrangements. Condolences may be left for the family online at koupfunerals.com

The family of Harriet Shumard created this Life Tributes page to make it easy to share your memories.

Send flowers to the Shumard family.