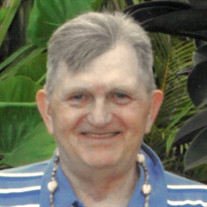 Hans Joachim “John” Gehmlich of Climax, died on Wednesday, July 4, 2018 at Wesley Medical Center, in Wichita, at the age of 73. He was born on January 30, 1945, in Zeuthen, Germany, the son of Richard Rudolf and Irmgard Charlotte Frieda (Ludwig) Gehmlich. He was raised in Zeuthen, a small town southeast of Berlin, attending local schools. At the age of 15, less than a year before the rise of the Berlin wall, he followed his parents, immigrating to Canada at Calgary. The family later came to the United States, making their home in Westminster, California, where he finished his schooling. They later lived in Huntington Beach, California. John joined the United States Army in the mid 1960’s, serving with honor and dignity in Vietnam. After his discharge, he made his home in Anaheim, California. On March 10, 1969, John was united in marriage to Sheila Crabtree in Las Vegas, Nevada. They made their home in California and later Texas. To this union, two sons were born. John worked as a meat cutter and later as a pipe heat treatment technician. The family lived in many places across California, Texas, and New Jersey, retiring to Climax, Kansas. John was a lifetime member of the VFW and the American Legion. He is survived by his wife, Sheila of the home; two sons, Kenneth Dale Gehmlich of Malone, Florida; and Michael Gehmlich of Chicago, Illinois; and one half-brother and one half-sister. He was preceded in death by his parents. Graveside services will be held at 10:00 A.M., Wednesday, July 11, 2018 at Greenwood Cemetery, in Eureka with Pastor Jerry Green officiating. Military honors are being rendered by VFW Post 2712. In lieu of flowers, the family has requested that memorials be made to VFW Post 2712 or to St. Jude Children’s Research Hospital. Contributions may be sent in care of Koup Family Funeral Home, P.O. Box 595, Eureka, KS 67045, which is overseeing arrangements. Condolences may be left for the family online, at koupfunerals.com.

The family of John Gehmlich created this Life Tributes page to make it easy to share your memories.

Send flowers to the Gehmlich family.