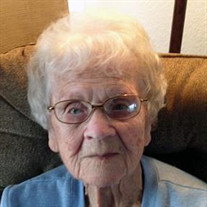 Gwendolyn “Dolores” Ashlock of Eureka, died on Thursday, October 1, 2020, at her home in Eureka, at the age of 99. She was born on November 23, 1920, in Lamar, Colorado, the daughter of Clyde Ernest “Buddy” and Gladys Centelia (Nelson) Williams. She was raised in the Neal/Quincy area and attended Tonovay High School. On June 22, 1938, Dolores was united in marriage to Freddie Andrew Ashlock. They made their home in the Quincy/Virgil area. To this union, three daughters were born. Freddie farmed and she was a homemaker. They retired in the early 70’s and moved to Eureka in 2006. Freddie preceded her in death on February 20, 2007. Dolores loved sewing and gardening. She was a member of the Quincy United Methodist Church. She is survived by two daughters, Elsie Nichols of Eureka; and Linda Corbin of Emporia; six grandchildren; nine great-grandchildren; five great-great-grandchildren; and four siblings: Bob Williams of Eureka; Grover Williams of Searchlight, Nevada; Marjorie Whitehall of Belfair, Washington; and Melvin “Butch” Williams of Stroud, Oklahoma. She was preceded in death by her parents; husband; one daughter, Eva LaVerne Ashlock; one grandson, Tony Noller; one great-grandson, Tyler Nichols; and eight siblings: Cecil Williams, Maxine Wilson, Melba Pugh, Erma Sherman, Bill Williams, Donald Williams, Johnnie Williams, and Sue Laughlin. Graveside services will be held at 11:00 A.M., Monday, October 5, 2020, at Virgil Cemetery, with Pastor John Craighead of the Jefferson Street Baptist Church officiating. Koup Family Funeral Home is overseeing arrangements. Condolences may be left for the family online, at koupfunerals.com.

The family of Dolores Ashlock created this Life Tributes page to make it easy to share your memories.