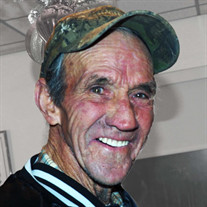 Gilbert Alfred “Jerry” Soule formerly of Madison, died on Wednesday, December 15, 2021, at his home in Cassoday, at the age of 84. He was born on November 27, 1937, in Eureka, the son of Freeman Wilber and Sarah Emma (Cronk) Soule. He was raised in the Eureka area and graduated from Eureka High School. After his schooling, he joined the United States Navy serving in Adak, Alaska. After his honorable discharge, he returned home. On March 21, 1959, Jerry was united in marriage to Marilyn Marie Higbee in Miami, Oklahoma. They made their home in Eureka for a short time before moving to El Dorado. To this union, three daughters were born. Later the family settled in rural Madison. Jerry began working in the oil fields with his brothers, but finally settled with building Jerry’s Well Service. He ran it for many years while also raising cattle. He later started Jerry’s Tree Cutting Service and only retired in the last couple years. In his younger days, Jerry enjoyed goose hunting, noodling, and very much enjoyed raising coon dogs and coon hunting. He is survived by his wife, Marilyn of the home; daughters, Carolyn Soule of Wichita; Vickie and husband Boyd Schneider of Hamilton; and Natalie and husband, Tim Donges of Cassoday; four grandchildren: Boyd J. Schneider, Jared Schneider, Jesse Galbraith; and Rusty Galbraith; five great-grandchildren; and five siblings: Joan Talkington of Hamilton; Thedda Olson of Eureka; Sharron and husband, Earl Urton of Eureka; Karen “Maude” and husband, John Nordmeyer of Eureka; and Richard “Dick” and wife, Patricia Soule of Eureka. He was preceded in death by his parents; and ten siblings: Bertha Erickson; Betty Uhl; Eleanor Jacoby; Phyllis Enos; Susan Thole; Merle “Sonny” Soule; Carol Soule; William “Bill” Soule; Sandra Soule; and Florence Sellers. Funeral services will be held at 10:00 A.M., Tuesday, December 21, 2021, at Koup Family Funeral Home, in Eureka with Pastor Jim Helzer of the Cornerstone Bible Church of Burns officiating. Interment will follow at Andrew Cemetery, Madison. Visitation hours are set from 5:00 P.M. to 7:00 P.M., Monday, at the funeral home. In lieu of flowers, the family requests that memorials be made to the Greenwood County Historical Society Museum or to the Kansas Oil Museum. Contributions may be sent in care of Koup Family Funeral Home, PO Box 595, Eureka KS 67045, which is overseeing arrangements. Condolences may be left for the family online, at koupfunerals.com.

The family of Jerry Soule created this Life Tributes page to make it easy to share your memories.

Send flowers to the Soule family.