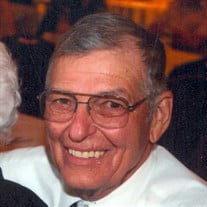 George Henry Casey of Toronto, died on Tuesday, July 5, 2016 at Via Christi – St. Francis Medical Center, in Wichita, at the age of 83. He was born on November 3, 1932, in Burlington, the son of Samuel Thomas and Leona Letitia (Errett) Casey. He was raised in Burlington and graduated from local schools. After graduation, he joined the United States Army, serving in Korea with honor and dignity. While stationed in Washington, D.C., he met Rose Marie Pressman. On July 23, 1955, they were united in marriage in Frostburg, Maryland. They later made their home in Saint Louis, Missouri, where George worked for Greyhound Lines and later for Volkswagen. In 1966, the family moved to Lebo, Kansas where George lived as a farmer. They later moved to Greenwood County where he again farmed and ranched before beginning work for Koch Industries as a mechanic. He retired in the late 1980’s. Rose preceded him in death on November 18, 1995. On September 7, 1997, George was united in marriage to Elaine Trent in Burlington. They made their home in Toronto. He was a member of the Toronto United Methodist Church, the Kansas Livestock Association, and American Legion Post #325 of Toronto. George is survived by his wife, Elaine of the home; three children, Keith Edward and wife, Dina Casey of Dighton, Kansas; Letitia and husband, Jim Keenan of Oakley, Kansas; and Teresa and husband, Bernard Handley of Hartford, Kansas; step-son, Tony and wife, Nancy Trent of Dayton, Ohio; seven grandchildren; nine great-grandchildren; and one brother, Melvin Casey of Hamilton. He was preceded in death by his wife, Rose; son, Vernon Scott Casey; and one brother, Harvey Casey. Funeral services will be held at 10:00 A.M., Friday, July 8, 2016 at Koup Family Funeral Home, in Eureka with Pastor Kevin Lawrence of the Toronto United Methodist Church officiating. Interment will follow at Neal Cemetery. Visitation hours are set from 4:00 P.M. to 6:00 P.M., Thursday, at the funeral home. In lieu of flowers, the family has requested that memorials be made to American Legion Post #325 of Toronto or to the Toronto United Methodist Church. Contributions may be sent in care of Koup Family Funeral Home, P.O. Box 595, Eureka, KS 67045, which is in charge of service arrangements. Condolences may be left for the family online at koupfunerals.com.

George Henry Casey of Toronto, died on Tuesday, July 5, 2016 at Via Christi &#8211; St. Francis Medical Center, in Wichita, at the age of 83. He was born on November 3, 1932, in Burlington, the son of Samuel Thomas and Leona Letitia (Errett)... View Obituary & Service Information

The family of George Henry Casey created this Life Tributes page to make it easy to share your memories.

Send flowers to the Casey family.