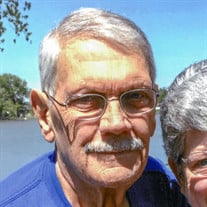 Gary Lyndal Rundell of Eureka, died on Friday, February 11, 2022, at Greenwood County Hospital in Eureka, at the age of 82. He was born April 27, 1939, in Yale, Oklahoma, the son of Clarence M. and Lucille “Faye” (Dunn) Rundell. He was raised in Wichita and attended local schools, graduating from West High School. While in high school, Gary met the love of his life, Ann “Shirley” Campbell. Following graduation, the two were united in marriage. Two weeks later, Gary joined the Navy, serving four years with honor and dignity. To this union two sons were born. Upon his completion of service, he returned to Wichita where he worked as an appliance repairman, for Rick’s Appliance, until he retired. He and Shirley moved to Eureka Lake in 2002. Gary was a member of the Calvary Baptist Church while they lived in Valley Center for more than 30 years and served as a Deacon. Upon moving to Eureka, they became members of the Jefferson Street Baptist Church and Gary again served as a Deacon. Gary is survived by his wife, Shirley of the home; two sons: Dennis and wife, Cheryl Rundell of Valley Center; and Darren Rundell of Eureka; three grandchildren: April (Rundell) Powers, Lindsey Rundell, and Brady Rundell; five great-grandchildren: Hartley, Clara, Michaela, Zellie, and Nathan; and one sister, Joyce Dernovish of Olathe. He was preceded in death by his parents, and an infant brother, Donald. Funeral services will be held at 11:00 A.M., Friday, February 18, 2022, at the Jefferson Street Baptist Church in Eureka, with Pastor John Craighead officiating. Interment will follow at Greenwood Cemetery. In lieu of flowers the family requests that memorials be made to the Jefferson Street Baptist Church. Contributions may be sent in care of Koup Family Funeral Home, P. O. Box 595, Eureka, Kansas, which is overseeing arrangements. Condolences may be left for the family online at koupfunerals.com.

The family of Gary L. Rundell created this Life Tributes page to make it easy to share your memories.

Send flowers to the Rundell family.