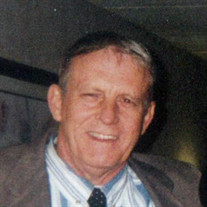 Freddie Leslie Denchfield of Neal, died on Friday, January 4, 2019, at Select Specialty Hospital in Wichita, at the age of 74. He was born on October 12, 1944, in San Antonio, Texas, the son of Leslie Porter and Dorothy Marie (Ashlock) Denchfield. Freddie was raised in Neal and graduated from Tonovay High School with the Class of1963. He always loved fast cars and some of his favorite pastimes were working on cars of all makes and models. He attended college for auto body work. He also greatly enjoyed his years working in the oil fields for Mobil. His time at Mobil gave him the opportunity to travel around the country and he even worked some in Abu Dhabi, UAE. He also spent time in Hawaii drilling water wells. Oil was his passion. When oil prices began declining, he moved on to work for Boeing in Wichita. He remained there until his retirement. During his retirement, he loved shopping at Goodwill and auctions, and spending time in nature. Freddie is survived by his daughter, Heather Denchfield of Shawnee, Kansas; his mother, Dorothy of Neal; brother, David of Climax; and his close friend and cousin, Otis Ashlock of Neal. He was blessed to share a home with his mother for a few years. During that time, they were not only mother and son but best friends. Memorial services will be held at 2:00 P.M., Friday, January 11, 2019 at the Neal United Methodist Church with Pastor Susan Galvan of the Severy United Methodist Church officiating. Cremation has been effected. Inurnment will follow at a later date at Neal Cemetery. In lieu of flowers, the family has requested that memorials be made to the Neal Community Building. Contributions may be sent in care of Koup Family Funeral Home, P.O. Box 595, Eureka, KS 67045. Condolences may be left for the family online, at koupfunerals.com.

Freddie Leslie Denchfield of Neal, died on Friday, January 4, 2019, at Select Specialty Hospital in Wichita, at the age of 74. He was born on October 12, 1944, in San Antonio, Texas, the son of Leslie Porter and Dorothy Marie (Ashlock) Denchfield.... View Obituary & Service Information

The family of Freddie Leslie Denchfield created this Life Tributes page to make it easy to share your memories.

Send flowers to the Denchfield family.