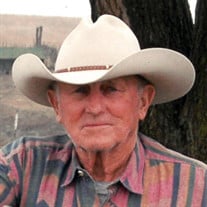 Fred A. Hays, son of the late John D. and Lillian Rosena Amelia (Rathke) Hays, rode the last trail, Thursday, June 10, 2021, at Wesley Medical Center, in Wichita, Kansas, at the age of 90, due to complications from a vehicle accident. He was born December 31, 1930, on a farm west of Olpe, Kansas. He grew up on the Johnson Ranch east of Hamilton and attended District 24 Grade School. As a very young boy he began helping his father with the cattle and farming operations. He worked hard haying and raking with a team of horses. He also well remembered the time in the fifth grade he drove a team of horses from Hamilton to Olpe. He rode a horse to school until his sophomore year when he could afford to buy a Model A. During his high school years, he excelled in football, basketball and track. He set many local and state records while participating in state track meets. He graduated from Hamilton High School with the class of 1948. On September 21, 1950, Fred married his high school sweetheart, Edwina Zimmerman, in El Dorado, Kansas. He worked for Sohio Oil Company before being drafted into the U.S. Army in November 1951. He was stationed at Camp Roberts, California before being sent to Korea. Hays, 7th Infantry Regiment, 3rd Division, was awarded the Bronze Star in connection with military operations against an armed enemy in Korea. Sergeant Hays began his career as an Ammunition Bearer, rapidly advancing until he became Gunnery Sergeant of the Mortar Platoon. The speed and accuracy with which he delivered a fire mission won him great praise from all members of the platoon, officers, and enlisted men as well. Sgt. Hays was always available and ready to be of assistance in any way possible. He passed on to the junior members of the platoon the results of his knowledge and experience. While training the men of his platoon, he willingly gave them full benefit of the combat knowledge and experience, enabling them to meet and overcome the difficulties they encountered. His positive and aggressive attitude contributed much to the high morale of his platoon. This positive attitude followed him home in 1953. Fred returned to Edwina and the small house they had purchased earlier at 802 E. Vermont. He continued his job with Sohio Oil Co. and later Wood Oil Co. in order to get a toehold in the ranching business. In May of 1955, he and his wife purchased the present-day ranch on a GI loan, and moved there with their young daughter, Vicki Lynn. They started with five cows, but bad luck hit the first year when three of the five were struck by lightning. From 1955 to present day, the cattle herd and the home place pasture acres have grown in size. Fred continued his love of cattle by leasing many acres in the Flint Hills and grazing cattle from many states. Many of his customers returned year after year, some even to the next generation. He saw many changes in the different ways of handling cattle, including the use of helicopters for round-ups; although a good horse was always kept saddled in his corral. Fred always said, “You never know what might come up”. During his life he had numerous encounters with cattle and horses, causing many injuries. Fred didn’t let any injury or illness, including cancer, keep him down for long. He always returned to the pastures and taking care of the cattle. This was his life. He passed his deep respect for the land on to his family. It was witnessed every day by everyone around him. He broke his neck in 2014 while working on tasks to preserve the land. Anyone who ever met him knew he was the “Original Old Time Cowboy”. Fred was the horse leader for the Union Shockers 4-H Club, also assisting neighborhood members with their projects. He was a member of Veterans of Foreign Wars, Greenwood County Cattlemen’s Association, and the First United Methodist Church. He is survived by his wife, Edwina, of the home; daughter, Vicki Lynn (Hays) Walford and husband, Larry D. of Eureka; two grandsons: Shane and wife, Angie Frakes; and Buck and wife, Camille Frakes of Eureka; five great-grandchildren; three great-great-grandsons; and one younger sister, Doreen Homewood and husband Don, of Topeka. He was preceded in death by his parents; an older brother, John D. Hays, Jr.; and a younger brother, Jackie L. Hays, and a nephew Steven Homewood. Private family services will be held at sundown, at End of The Trail Cemetery on F/H Ranch. Pallbearers will be his beloved grandsons, who were always by his side. In lieu of flowers, the family requests that memorials be made to Greenwood County Hospital. Contributions may be sent in care of Koup Family Funeral Home, PO Box 595, Eureka KS 67045, which is overseeing arrangements. Condolences may be left for the family online, at koupfunerals.com.

Fred A. Hays, son of the late John D. and Lillian Rosena Amelia (Rathke) Hays, rode the last trail, Thursday, June 10, 2021, at Wesley Medical Center, in Wichita, Kansas, at the age of 90, due to complications from a vehicle accident. He was... View Obituary & Service Information

The family of Fred A. Hays created this Life Tributes page to make it easy to share your memories.

Fred A. Hays, son of the late John D. and Lillian Rosena Amelia...

Send flowers to the Hays family.