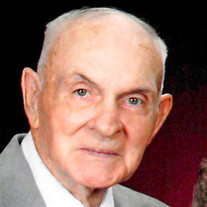 Frank “Vernon” Ball of Eureka, died on Thursday, September 12, 2019 at the Greenwood County Hospital, in Eureka, at the age of 94. He was born on September 9, 1925, in Greenwood County, Kansas, the son of Frank Laverd and Cova (Snuffer) Ball. He was raised in Eureka and attended local schools. He joined the United States Army during World War II, serving with honor and dignity in the European theater. By the time of his discharge, he had attained the rank of sergeant. He later earned a football scholarship to Independence Community College. After college, he began working for Halliburton. On September 10, 1949, Vernon was united in marriage to Lois Jean Freeman in Eureka. They made their home in Eureka. To this union, two children were born. For over ten years, Vernon and Lois together managed the Christian Hills Camp in Eureka. After his retirement, Vernon farmed, raised cattle, and managed real estate. He was a member of the Christian & Congregational Church, serving on many different boards during the years. He was also a member of Fidelity Lodge #106. He is survived by his children, Carmen Ball of Enid, Oklahoma; and Gail W. Ball of Leon; two grandchildren: Devin Wade Ball and Lindsay Nicole Ball; and two great-grandchildren, Ethan and Elena Ball. He was preceded in death by his parents; wife, and ten siblings. Memorial services will be held at 10:00 A.M., Saturday, September 21, 2019 at the Christian & Congregational Church in Eureka with Mr. Bruce Detwiler officiating. Cremation has been effected. In lieu of flowers, the family has requested that memorials be made to the Christian & Congregational Church or to the Kansas Humane Society. Contributions may be sent in care of Koup Family Funeral Home, P.O. Box 595, Eureka, KS 67045, which is overseeing arrangements. Condolences may be left for the family online, at koupfunerals.com.

The family of Vernon Ball created this Life Tributes page to make it easy to share your memories.

Send flowers to the Ball family.