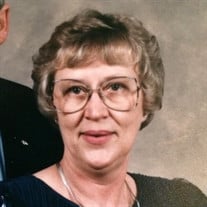 Faye Marie Parker of El Dorado, died on Sunday, September 15, 2019, at Susan B. Allen Memorial Hospital, in El Dorado, at the age of 81. She was born on June 16, 1938, in Checotah, Oklahoma, the daughter of James Luther and Maudie Queenie Ethel Mayflower (Smith) Lewis Justice. She was raised in Checotah and attended local schools. On August 25, 1953, Faye was united in marriage to Lowell Gene Parker in Eufaula, Oklahoma. They made their home in Oklahoma. To this union three children were born. They lived in California for a short time before returning to Oklahoma and later to Kansas. While in Pittsburg, Kansas, Faye began the first step in her medical career. They later lived in Independence and eventually Eureka. Faye started at Greenwood County Hospital, in 1967, cleaning rooms until a spot opened for a surgical technician. She worked there for many years eventually completing a CNA and CMA certifications. She retired from the hospital in 2000. She continued in the medical field however and worked at the nursing home in Eureka. She and Lowell moved to El Dorado in 2001 when he retired. Faye finally retired from the nursing home in 2013. Lowell preceded her in death on March 11, 2014. She was a member of the Jefferson Street Baptist Church and was very active at the El Dorado Senior Center. She is survived by her daughters, Cheryl and wife, Ashley Parker of El Dorado; and Toni Parker of Derby; four grandchildren: Michael and wife, Lesalee Allen, Misti and husband, Nicholas Valentine, Matthew and wife, Jessica Allen, and Kaeylynn Mitchell; and nine great-grandchildren: Mikey, Hannah, Carter, Lillian, Kylee, Gavin, Savannah, Jacob, and River. She was preceded in death by her parents; daughter, Gayla Jean Parker; and four siblings: Ethel Humphrey, Hazel Arnett, JC Justice, and Paul Justice. Funeral services will be held at 2:00 P.M., Friday, September 20, 2019 at Koup Family Funeral Home, in Eureka with Rev. Ruth Waite of the First Presbyterian Church of El Dorado officiating. Interment will follow at Greenwood Cemetery, Eureka. Visitation hours are set from 5:00 P.M. to 7:00 P.M., Thursday, at the funeral home. In lieu of flowers, the family has requested that memorials be made to the Greenwood County Hospital Foundation. Contributions may be sent in care of Koup Family Funeral Home, P.O. Box 595, Eureka, KS 67045, which is overseeing arrangements. Condolences may be left for the family online, at koupfunerals.com.

Faye Marie Parker of El Dorado, died on Sunday, September 15, 2019, at Susan B. Allen Memorial Hospital, in El Dorado, at the age of 81. She was born on June 16, 1938, in Checotah, Oklahoma, the daughter of James Luther and Maudie Queenie Ethel... View Obituary & Service Information

The family of Faye Marie Parker created this Life Tributes page to make it easy to share your memories.

Send flowers to the Parker family.