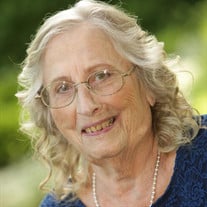 Fay Maxine Johnson, of Eureka, Kansas, died on Thursday, February 9, 2017, at Greenwood County Hospital in Eureka, at the age of 88. She was born February 26, 1928, in Quincy, Kansas the daughter of Arthur and Anna (Crouch) Watts. She attended Number 9 and Quincy schools. On December 31, 1945, she was united in marriage to Virgil Claude Johnson in El Dorado, Kansas. He preceded her in death on February 18, 1998. Fay worked at Beech Aircraft during World War II. Following Virgil’s discharge from the Navy, they lived in Alaska, New Mexico, Washington, California, and Arizona. The family returned to Eureka, Kansas in 1974, and made it their permanent home. She was a homemaker and cared for her children, Virgil, and several grandchildren. Fay enjoyed sewing, crocheting, gardening, refinishing furniture, loved to tinker with things, and taught herself to play the guitar. In 2004, Fay enjoyed traveling to Spain with her daughter, Imogene. She is survived by two sons, Glenn and wife, Karen Johnson of Augusta, Kansas; Randy and wife, Hattie Johnson of Augusta, Kansas; four daughters, Connie and husband, Ernie Unger of Towanda, Kansas; Marleen Johnson of Eureka, Kansas; Brenda and husband, Ben Fox of Eureka, Kansas; and Imogene and husband, Shane Lewis of Los Angeles, California; 17 grandchildren; 22 great-grandchildren; 3 great-great grandchildren; four sisters, Dolly Ashlock of Eureka, Kansas; Nellie Johnson of Severy, Kansas; Betty Joann Ashlock of Virgil, Kansas; Anna Mae Hare of Coyville, Kansas; and Sharon Hellman of Eureka, Kansas; and one brother, Arthur Ray Watts of Virgil, Kansas. She was preceded in death by her parents; and husband, Virgil; and six siblings. Funeral services will be held at 2:00 P.M., Monday, February 13, 2017, at Koup Family Funeral Home in Eureka with Pastor Larry Moore of the Eureka Community Church officiating. Interment will follow at Greenwood Cemetery with Mr. Rob Young officiating. Visitation hours are set from 1:00 P.M. to 3:00 P.M., Sunday, at the funeral home. In lieu of flowers, the family has requested that donations be made to the Eureka Nursing Center for the Physical Therapy Department. Contributions may be sent in care of Koup Family Funeral Home, P.O. Box 595, Eureka, Kansas 67045, which is overseeing arrangements. Condolences may be left for the family online, at koupfunerals.com.

Fay Maxine Johnson, of Eureka, Kansas, died on Thursday, February 9, 2017, at Greenwood County Hospital in Eureka, at the age of 88. She was born February 26, 1928, in Quincy, Kansas the daughter of Arthur and Anna (Crouch) Watts. She attended... View Obituary & Service Information

The family of Fay M. Johnson created this Life Tributes page to make it easy to share your memories.