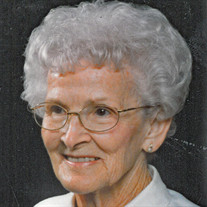 Evelyn Eudora (Souders) Cracraft was born in Eureka to Cread Souders and Hazel (Bailey) Souders on December 31, 1920. Evelyn passed away on April 3, 2016 in the Eureka Nursing Center. Upon graduation from Eureka High School in 1938 she attended college in Hays, Kansas where she met and married Owen Roland Fogo in August 1940. They had one daughter Janis in 1942. They later divorced and she married the love her life, Phil Cracraft on November 11, 1945. He preceded her in death October 16, 2007. Evelyn was a very skilled seamstress and loved to knit, taking pleasure in making beautiful gifts for her family and friends. She won several ribbons with her knitting at the County fairs. Her ancestors Sounders, Olson, Bailey, and Talkingtons, were Kansas homesteaders in the early 1800’s. Anyone who knew her at all knew of her love and passion for any team from Kansas and was known for ringing her fancy bell when they scored. She was proud to claim to be a breast cancer survivor, beating the disease twice. Family on both sides relied on her sharp memory for information needed for maintaining their family history. She was extremely proud of her only grandchild answering the call to become a Pastor. Bragging on any and all he has accomplished as a Pastor and in the service. She loved to shower anyone with Bibles and any Christian material to insure their salvation. She was a member of the Neal Evangelical Free Church in Neal, KS. While she and Phil lived in California they established a business called Musicraft. They semi-retired back in their hometown Eureka in 1977. After her husband passed away she lived shortly near her daughter in Cherryvale but requested to live out her life in the Eureka Nursing Center where she was quickly named Valentine Queen the first year and Elder of the month this past year. She was proud to have been presented with a beautiful throw and certificate from the Veterans Association in gratitude for her husband’s service time in the Navy during World War II. She was the recipient of an award from the KHCA that is given to a Senior citizen residing in a nursing home in the Kansas Heartland for her exemplary work in helping those less fortunate. You knew if you met her you were going to get plenty of hugs. They are free you know. She was known for her quick sense of humor. She was preceded in death by her parents; brother, Richard Gail; and sisters, Ilda and Norma Jean. She is survived by daughter, Janice and Lew Kidd of Cherryvale, KS; grand-son, Kevin and wife Lynn Kidd; great-grandsons, David and Joshua; great-granddaughter, Hannah Kidd of Augusta, Maine; and many nieces and nephews that she truly adored. A celebration of life will be held at 2:00 P.M., Tuesday, July 5, 2016 at Koup Family Funeral Home with Pastor Kevin Kidd of RiverRock Christian Fellowship Church of Augusta, Maine and Pastor Larry Evans of the Neal Evangelical Free Church officiating. Interment has been made at Greenwood Cemetery, Eureka. In lieu of flowers, the family has requested that memorials be made to Gideons International or to the Neal Evangelical Free Church. Contributions may be sent in care of Koup Family Funeral Home, P.O. Box 595, Eureka, KS 67045, which is in charge of service arrangements.

Evelyn Eudora (Souders) Cracraft was born in Eureka to Cread Souders and Hazel (Bailey) Souders on December 31, 1920. Evelyn passed away on April 3, 2016 in the Eureka Nursing Center. Upon graduation from Eureka High School in 1938 she attended... View Obituary & Service Information

The family of Evelyn Eudora Cracraft created this Life Tributes page to make it easy to share your memories.

Evelyn Eudora (Souders) Cracraft was born in Eureka to Cread...

Send flowers to the Cracraft family.