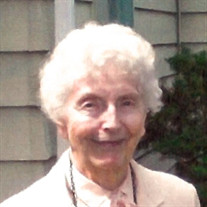 Evalyn Lee Martell, formerly of Hamilton, died on Sunday, September 24, 2017 at Vintage Park in Eureka, having reached the age of 96. She was born on May 25, 1921, in Hickman Mills, Missouri, the daughter of Walker and Nelle Bernice (Chrisman) Ellis. The family lived in several places during the Great Depression, including Hiawatha and Cedarvale. Evalyn graduated from Cedarvale High School and then attended Baker University, graduating with a Bachelor of Science degree in Education. She was a teacher in rural schools for a few years. On a trip east to work as a librarian, Evalyn met Henry Stevens Martell. They were united in marriage in Nashua, New Hampshire on September 9, 1946. The couple made their home in Hamilton in 1947, where her grandmother and her parents resided. She was a member of the Hamilton United Methodist Church and the United Methodist Women. Evalyn is survived by three children, Eric and wife, Sally Martell of Orlando, Florida; Ian and wife, Sherry Martell of Eureka, Kansas; and Robin and husband, Peter Searle of Colorado Springs, Colorado; eleven grandchildren, Morghan, Jordan, Josh, Amanda, Ethan, Kaitlee, Ashley, Chelsea, Ashlyn, Brendon, and Tristan; and nine great-grandchildren. She was preceded in death by her husband, Henry, and one daughter, Reagan Martell. Funeral services will be held at 11:00 A.M., Saturday, October 7, 2017, at the Hamilton United Methodist Church, with Reverend Kenneth Baker of the Eureka First United Methodist Church, officiating. Interment will follow at Janesville Cemetery. In lieu of flowers, the family has requested that memorials be made to the Hamilton United Methodist Women or to Vintage Park. Contributions may be sent in care of Koup Family Funeral Home, P.O. Box 595, Eureka, KS 67045, which is overseeing arrangements. Condolences may be left for the family online at KoupFunerals.com.

Evalyn Lee Martell, formerly of Hamilton, died on Sunday, September 24, 2017 at Vintage Park in Eureka, having reached the age of 96. She was born on May 25, 1921, in Hickman Mills, Missouri, the daughter of Walker and Nelle Bernice (Chrisman)... View Obituary & Service Information

The family of Evalyn Lee Martell created this Life Tributes page to make it easy to share your memories.

Send flowers to the Martell family.