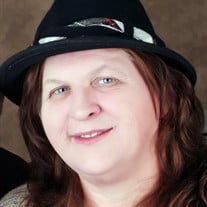 Eva Lucille Patterson of Eureka, died on Wednesday, January 8, 2020, at Wesley Woodlawn Hospital, in Wichita, at the age of 67. She was born on November 25, 1952, in Wichita, the daughter of E. Raymond “Ray” and Virginia Ardie (Hodgson) Deeder. She was raised in Eureka, Kansas and in California. She graduated with the class of 1971 in California. She was married and to this union, one son was born. She later returned to Eureka. She worked at Twilight Manor in Howard and various other places, usually as a caregiver. On July 2, 1998, Eva was united in marriage to Bill Patterson in Eureka. She is survived by her husband, Bill of the home; one son, Lee Ray Fitzwater and partner AnnMarie Gibson of Eureka; two step-children, Stacy Ann and husband, Mike Wicka of Long Beach, California; and Brian Kenneth and wife, Misty Patterson of Eureka, Nevada; eight grandchildren; and three siblings: Bill Deeder of Eureka; Tula Sadie Louise Murphy of Moline, Kansas; and Claude Deeder of Eureka. She was preceded in death by her parents and one brother, Charles Raymond Deeder. Memorial services will be held at 2:00 P.M., Friday, January 17, 2020, at Koup Family Funeral Home, in Eureka with Ms. Janet Henry officiating. Inurnment will follow at Greenwood Cemetery, Eureka. In lieu of flowers, the family has requested that memorials be made to the William Fitzwater College Fund. Contributions may be sent in care of Koup Family Funeral Home, P.O. Box 595, Eureka, KS 67045, which is overseeing arrangements. Condolences may be left for the family online, at koupfunerals.com.

The family of Eva Lucille Patterson created this Life Tributes page to make it easy to share your memories.

Send flowers to the Patterson family.