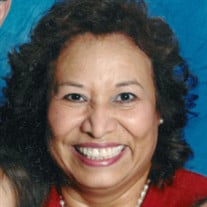 Ernestine Josephine Hawthorne of Eureka, died on Monday, February 22, 2021, at Ascension Via Christi St. Francis, in Wichita, at the age of 73. She was born on March 6, 1947, in Phoenix, Arizona, the daughter of Ernest and Helen (Montez) Ayala. She was raised in Gilroy, California and attended local schools. Growing up, she spent a lot of time picking fruit for her father who owned a trucking company. She worked in real estate, modeling, and eventually microelectronics, which then opened the door to work for Boeing. At Boeing she utilized her experience and bilingual language skills. She was later transferred to Seattle where she met Bruce. On March 20, 1991, Ernestine was united in marriage to Bruce Edward Hawthorne in Las Vegas. They made their home in Seattle and later Wichita. They later retired to Eureka. With Boeing, she retired after a 40-year career as an inspector, encompassing processes from circuitry of circuit cards, electronics, functional test, heat treat of metal, welding, sheet metal assembly, and final airplane pre-flight inspections. She never passed up an opportunity to learn new technology and processes to ensure her value to further her career. Ernestine was a member of the Catholic Church. She is survived by her husband, Bruce of the home; two children: Jesse Gradillas of Seattle, Washington; and Laurie Griffin of Augusta, Kansas; four grandchildren: Ahn-Alika Wilsey, Jesse WhiteEagle Gradillas, Diego WhiteEagle Gradillas, and Joaquin WhiteEagle Gradillas; three great-grandchildren: Ryan Wilsey, Angelito Wilsey, and KaLeiyah Wilsey; and four siblings: Mary Neisner of Modesto, California; Ernie Ayala of Vallejo, California; Cathy Reloba of Fresno, California; and Carol Brooks of Seattle, Washington. She was preceded in death by her parents; and two siblings: Carmen Gradillas, and John Ayala. Funeral mass will be held at 1:00 P.M., Saturday, February 27, 2021 at Sacred Heart Catholic Church in Eureka with Fr. Dominic Potnuru officiating. Masks should be worn, and social distancing observed. Interment will follow at Greenwood Cemetery. Rosary recitation will be held at 6:15 P.M., Friday, February 26, 2021 at Koup Family Funeral Home, Eureka. In lieu of flowers, the family requests that memorials be made to Sacred Heart Catholic Church. Contributions may be sent in care of Koup Family Funeral Home, P.O. Box 595, Eureka, KS 67045, which is overseeing arrangements. Condolences may be left for the family online, at koupfunerals.com.

Ernestine Josephine Hawthorne of Eureka, died on Monday, February 22, 2021, at Ascension Via Christi St. Francis, in Wichita, at the age of 73. She was born on March 6, 1947, in Phoenix, Arizona, the daughter of Ernest and Helen (Montez) Ayala.... View Obituary & Service Information

The family of Ernestine Josephine Hawthorne created this Life Tributes page to make it easy to share your memories.

Send flowers to the Hawthorne family.