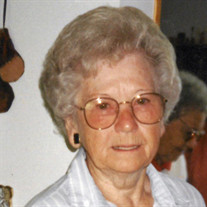 Erma Jean Sherman of Eureka, died on Thursday, November 1, 2018, at Greenwood County Hospital in Eureka, at the age of 91. She was born August 14, 1927, in Neal, the daughter of Clyde Ernest “Buddy” and Gladys Centelia (Nelson) Williams. She was raised in Neal, Kansas and Lamar, Colorado, attending Neal schools. On October 4, 1944, Erma was united in marriage to Willis Roy “Bus” Sherman in Eureka. They made their home in Virgil. To this union, one daughter, Peggy was born. They moved to Garden City, Kansas for five years but then returned home to the Virgil area. Erma loved to quilt and crochet and was well known as an excellent cook. Bus preceded her in death on July 24, 1993. She is survived by her daughter, Peggy Delzeit of Silver Lake, Kansas; several loving nieces and nephews; and six siblings: Dolores Ashlock of Eureka; Bob Williams of Eureka; Bill Williams of Eureka; Grover Williams of Searchlight, Nevada; Marjorie Whitehall of Belfair, Washington; and Melvin Williams of Stroud, Oklahoma. She was preceded in death by her parents; husband; and six siblings: Cecil Williams, Maxine Wilson, Melba Pugh, Donald Williams, Sue Laughlin, and John Williams; and son-in-law, Ray Delzeit, Jr. Funeral services will be held at 1:00 P.M., Monday, November 5, 2018, at Koup Family Funeral Home, in Eureka with Mr. Jayme A. Koup officiating. Interment will follow at Janesville Cemetery. The family has requested no floral arrangements. In lieu of flowers, memorial contributions may be made to Vintage Park of Eureka. Contributions may be sent in care of Koup Family Funeral Home, P.O. Box 595, Eureka, KS 67045, which is overseeing arrangements. Condolences may be left for the family online, at koupfunerals.com.

The family of Erma Jean Sherman created this Life Tributes page to make it easy to share your memories.

Send flowers to the Sherman family.