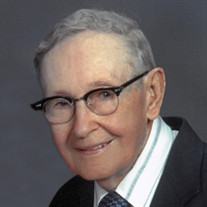 Elmer Harry Brawley of Eureka, Kansas died on Sunday, August 27, 2017 at Greenwood County Hospital, in Eureka, at the age of 100. He was born on September 29, 1916 to Harry and Selma (Peterson) Brawley, on his Grandpa Brawley’s farm near Climax, Kansas. Elmer moved with his parents to his grandma, Marie Peterson’s, farm near Climax in 1917. In October of 1919, Elmer’s parents bought a farm near Utopia. He and his parents moved to that farm the following Spring. He went to school in a one room grade school, District #67, and attended high school in Hamilton. He completed his sophomore year of high school. Upon the death of his father in 1935, Elmer and his mother continued to farm at Utopia for three more years. They moved back to his Grandma Peterson’s farm where Elmer helped his uncle, Arthur “Bud” Peterson with farming for the next 15 years. In 1946, Elmer and his mother moved to Climax. In 1952, he bought a car garage that he ran for one and a half years. Later he started the Climax Implement Company with a Massey Harris contract in 1954. Massey Harris bought the Harry Ferguson Company and the name was change to Massey Ferguson in the fall of 1957. Massey Harris made the first self-propelled combine. Elmer’s company carried a full line of tractors, combines, hay tools, and tillage tools. They carried parts and serviced all of the equipment that they sold. The Climax Implement Company was discontinued in September of 1974 after more than 20 years of operation. After the company closed, Elmer returned to farming on a farm that he had purchased in 1965 near Tonovay. During the time of managing the Climax Implement Company, Elmer also drove a school bus in the Climax area. As an adult, Elmer enjoyed playing baseball on a Climax team. He had a total of 62 years of working at different jobs before he retired. On May 18, 2002, Elmer married Martha (Recinos) Ross at the St. John’s Catholic Church in Hamilton. They made their home in Eureka. He is survived by his wife, Martha, of the home and several cousins. He was preceded in death by his parents, and several uncles and aunts. Funeral services will be held at 11:00 A.M., Friday, September 1, 2017, at the Christ Lutheran Church in Eureka, with Pastor Tim Meyer officiating. Interment will follow at the Pleasant View Cemetery near Climax. Visitation hours are set from 5:00 P.M. to 7:00 P.M., Thursday, at the funeral home. In lieu of flowers, the family requests that memorials be made to Christ Lutheran Church or to the funeral home for final expenses. Contributions may be sent in care of Koup Family Funeral Home, P.O. Box 595, Eureka, Kansas 67045, which is overseeing arrangements. Condolences may be left for the family online, at koupfunerals.com.

Elmer Harry Brawley of Eureka, Kansas died on Sunday, August 27, 2017 at Greenwood County Hospital, in Eureka, at the age of 100. He was born on September 29, 1916 to Harry and Selma (Peterson) Brawley, on his Grandpa Brawley&#8217;s farm near... View Obituary & Service Information

The family of Elmer Harry Brawley created this Life Tributes page to make it easy to share your memories.

Send flowers to the Brawley family.