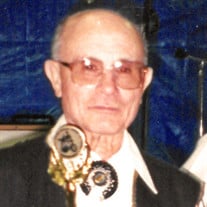 Eldon “Elliott” Mann, Jr., of Eureka, died Thursday, October 3, 2019 at the Eureka Nursing Center in Eureka, at the age of 85. Elliott was born December 24, 1933, near Neal, Kansas, the son of Eldon Elliott, Sr. and Flora (Groat) Mann. He grew up in the Tonovay area and graduated from Tonovay High School. He started his career in the grocery store business when he was in high school working at Safeway. On January 8, 1955, Elliott was united in marriage to Mary Yost. They celebrated 64 years of marriage. He was a manager at Foodtown and eventually had his own store – Mann’s IGA – until he went to work at IBP in Emporia. He retired from IBP in 2000 after 28 years. He began playing music at the age of three, playing solely by ear. He was a musician who enjoyed delighting his listeners. His genres included gospel, country, folk, and jazz. He was a member of several bands, traveling throughout the state, playing harmonica, fiddle, keyboard, guitar, mandolin, banjo, and performing as a backup singer. Elliott was also an avid gardener and could grow most anything when he set his mind to it. He was also a devoted WSU basketball fan. Through the years, he was a member of Kiwanis, Old Time Fiddlers, Pickers, & Singers, and the Lions Club, where he served a term as treasurer. Elliott is survived by his wife, Mary of the home; two daughters: Terri Hamilton of Eureka; and Teresa and husband, Mark Hendrickson of Eureka; nine grandchildren: Bridget Strickland, Jay Hamilton, Sean Thornton, Staci Seiter, Amber Thornton, Kelli Gulick, Ambrea Hendrickson, Beth Hendrickson, and Grace Hendrickson; fourteen great-grandchildren; two great-great-grandchildren; one brother, Alfred Mann of Burlington; and sister, Myra Larcom of Reece. He was preceded in death by his parents; a stillborn son; one sister, Myrna Magner; a great-great-granddaughter, Khloé; and son-in-law, John Hamilton. Funeral services will be held 2:00 PM., Monday, October 7, 2019, at Koup Family Funeral Home in Eureka, with Pastor Kevin Lawrence of the Climax United Methodist Church officiating. Interment will follow at Greenwood Cemetery. Visitation hours are set from 4:00 P.M. to 6:00 P.M. Sunday at the funeral home. In lieu of flowers, the family has requested that memorials be made to the Eureka Nursing Center. Contributions may be sent in care of Koup Family Funeral Home, P.O. Box 595, Eureka, KS 67045, which is overseeing arrangements. Condolences may be left for the family online, at koupfunerals.com.

The family of Eldon Elliott Mann Jr created this Life Tributes page to make it easy to share your memories.

Send flowers to the Mann family.