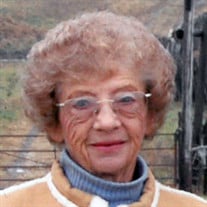 Edwina Mae (Zimmerman) Hays, known to many as “Grammie”, was lifted to Heaven to join her cowboy, on Monday, August 2, 2021, at Greenwood County Hospital in Eureka, at the age of 89. Her death was the result of a vehicle accident which also claimed the life of her husband. She was born November 20, 1931, in Lamont, Kansas, to Ed and Bernice Elizabeth (Newlon) Zimmerman, at her grandparents’ home. Her grandmother Zimmerman, who was a midwife, assisted with her birth. She attended Burkett Grade School, with her mare, Babe being her means of transportation. Adolf Zimmerman, her Swiss-born paternal grandfather encouraged her musical talents teaching her to play the piano. Edwina played that same piano daily in her own home. She attended Hamilton High School, graduating with the Class of 1949. During her high school years, she continued her love of music by playing the drums and winning many state contests. Naturally, Edwina was a baton twirler and later became drum majorette and homecoming queen. On September 21, 1950, Edwina married her high school sweetheart, Fred A. Hays, in El Dorado, Kansas. When he was drafted into the Army in 1951, she moved to Camp Pendleton, California. Edwina found a job the first day working in a dry cleaner. Many lifelong friends were made during this time. When Fred received orders he was being sent to Korea, she returned home to stay with her parents, and worked at Betsher Cleaners in Eureka. When Edwina received the news that her husband was coming home, time was short to travel to pick him up at Camp Crowder, Missouri. As she was leaving the Zimmerman driveway she remarked to her Dad, “I don’t know if I can get there on time.” Her Dad’s reply was, “You just step on it. I think you can make it”. Being Daddy’s girl and namesake, she did just that! She did speed through Joplin, Missouri at 80 mph, though, and was stopped by the highway patrol. While wearing her best attire, she explained to the officer that she was simply on her way to pick up her husband. Instead of issuing her a ticket, he gave her a red lights and siren escort right into Camp Crowder. She did make it – right on time! After his homecoming, they returned to their pink storybook home at 802 E. Vermont in Eureka, which they had previously purchased. In 1955, they bought the first plot of land which would be the beginning of F/H Ranch. The property had a small cottage which they moved to in May 1955 with their young daughter, Vicki Lynn. Edwina became employed with Greeley Gas Company, later known as Atmos Energy. She often prepared lunch for ranch hands before going to work in the mornings. This continued for many years as the ranch continued growing. In 1994, her retirement gift to herself was a 4-wheeler. She was now the full-time ranch wife. Her roles included cook, bookkeeper, nurse, and most importantly ranch hand, which always involved the endless chore of opening gates. By now she was known to everyone as “Grammie” and her absolute favorite job was cooking every day for her family and ranch hands! As a young girl she helped her mother prepare meals for their hired farm hands; this continued her whole life. Everyone was always welcome at Grammie’s table, regardless of if it was served on the pickup tailgate, in her warm country kitchen or in the dining room on a white tablecloth. Lunch was always the highlight of her day. Many of her cooking and baking skills were taught to her by her Grandmother Rosa (Schmied) Zimmerman, who was a professional baker in Switzerland. Grammie’s kitchen was always filled with the aroma of freshly made bread. When time allowed between meals, she enjoyed sewing, a skill taught to her by her mother at an early age. This enjoyment became a necessity when the cowboys became tangled in a barbed wire fence. She did squeeze out enough time in the early years to sew many dresses for her daughter. Later, sewing for the grandchildren gave her tremendous joy. All during her busy life she always had time to care for her mother and of course, the grandkids. Edwina was instrumental in organizing the Union Shockers 4-H Club, where she was the cooking leader for many years. She was a member of the Union Community Extension Unit, Greenwood County Hospital Auxiliary, and the First United Methodist Church. She is survived by her daughter, Vicki and husband, Larry Walford; two grandsons: Shane L. and wife, Angie Frakes; and Buck L. and wife, Camille Frakes; five great-grandchildren; and three great great-grandchildren, all of Eureka. She was preceded in death by her husband, Fred; her parents; an older sister, Rita Darlene (Zimmerman) Wiggins; and a younger brother, Dale Dean Zimmerman. Private family services will be held at high noon at End of the Trail Cemetery on F/H Ranch. Pallbearers will be Grammie’s Granddaughters, who always helped her make every lunch “Grand”. In lieu of flowers, the family requests that memorials be made to the Greenwood County Hospital. Contributions may be sent in care of Koup Family Funeral Home, P. O. Box 595, Eureka, Kansas 67045, which is overseeing arrangement. Condolences may be left for the family online, at koupfunerals.com.

Edwina Mae (Zimmerman) Hays, known to many as &#8220;Grammie&#8221;, was lifted to Heaven to join her cowboy, on Monday, August 2, 2021, at Greenwood County Hospital in Eureka, at the age of 89. Her death was the result of a vehicle accident... View Obituary & Service Information

The family of Edwina Mae Hays created this Life Tributes page to make it easy to share your memories.

Edwina Mae (Zimmerman) Hays, known to many as “Grammie”, was...

Send flowers to the Hays family.