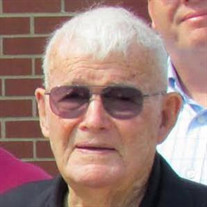 Edward Ausby Fry, formerly of Hamilton, Kansas, died on Sunday, December 25, 2016 at Good Samaritan Home in Olathe, Kansas, at the age of 93. He was born on December 6, 1923, in Sedgwick, Kansas, the son of Ausby Jonathon and Alice Lucille (Nichols) Fry. He was raised in Sedgwick, joined the Christian Church, and graduated from Sedgwick High School in 1941. He worked at Boeing Aircraft prior to joining the Army Air Force in November of 1942. He served as an aircraft technician, training B26 crews at airfields in Kansas. In August of 1945, he was deployed to Japan in what was to become the Army of Occupation. He was discharged in February of 1946. He revisited his military flying experience by becoming a private pilot in 1969, putting aside his wings in 1992. Ed bought land in rural Hamilton in 1946, and remained on the farm all his life. Over the years, he worked in cattle, hogs, timber, and goats. He was a good steward of the land, and was committed to improving it through various range land practices. On January 31, 1952, Edward was united in marriage to Lila Kathleen Carson at the United Methodist Church in Hamilton. They raised two children on the farm. Ed started working for the Kansas Turnpike in 1954, taking tolls at the Cassoday Exit. He became a Rural Mail Carrier in 1960, serving in Hamilton and later in Madison, retiring in 1984. In retirement, Ed worked part-time for Dobler Surveying. He served 18 years on the Hamilton School board, was secretary of the Walnut West Creek Water Conservation District, and Trustee of the United Methodist Church of Hamilton. He joined the Hamilton Masonic Lodge #301 (now Madison #196) and achieved membership in the Midian Shrine. For over 50 years as a “Circus Daddy,” he took school kids to the Shriner’s Circus in Wichita. Ed is survived by his wife, Lila, of the home; one daughter, Julia and husband, Lawrence MacLachlan of Prairie Village, Kansas; and one son, Phillip Fry and wife, Peggy Miles of Overland Park, Kansas; five grandchildren: Lydia Gibson; Claire MacLachlan; Duncan MacLachlan; Christopher Fry; and Abigail Fry; and two sisters, Helen Grattan of Rogers, Arkansas; and Ruth Creasser of Sedgwick, Kansas. He was preceded in death by his parents, and one sister, Clara Linden. Funeral services will be held at 1:00 P.M., Friday, December 30, 2016 at the Hamilton United Methodist Church in Hamilton, Kansas, with Pastor Warren Olson officiating. Interment will follow at Janesville Cemetery, Hamilton. Visitation hours are set from 12:00 P.M. to 1:00 P.M., Friday, at the church. In lieu of flowers, the family has requested that memorials be made to the Salvation Army or to the Kansas Masonic Foundation. Contributions may be sent care of Koup Family Funeral Home, P.O. Box 595, Eureka, Kansas, 67045, which is overseeing service arrangements. Condolences may be left for the family online, at koupfunerals.com.

Edward Ausby Fry, formerly of Hamilton, Kansas, died on Sunday, December 25, 2016 at Good Samaritan Home in Olathe, Kansas, at the age of 93. He was born on December 6, 1923, in Sedgwick, Kansas, the son of Ausby Jonathon and Alice Lucille... View Obituary & Service Information

The family of Edward Ausby Fry created this Life Tributes page to make it easy to share your memories.

Send flowers to the Fry family.