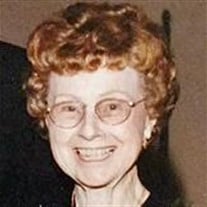 Edna Mae Birtciel Edna Mae Birtciel of Madison, Kansas, passed away peacefully on Saturday, January 6, 2018, at Emporia Presbyterian Manor, at the age of 93. She was born on February 1, 1924, in El Dorado, Kansas, the daughter of Vonzo and Verna Mae (Dowell) Beeman. She graduated from Hamilton High School, Hamilton, Kansas with the class of 1942. On March 26, 1943, Edna was united in marriage to Donald Quentin Birtciel in Eureka. They made their home near Madison. To this union, two children were born, Donna Mae & David. Edna was a homemaker for many years. She enjoyed cooking for her family & friends. She was known for her delicious pies & cakes. In 1964 she attended Beauty College in Wichita, Kansas, after which she opened Edna's Beauty Shop in Olpe, Kansas. She was a well-known beautician in the area for many years. In 1983 she sold her shop in Olpe & opened Edna's Beauty Salon in Madison, where she later retired. Edna is survived by her daughter-in-law, Mary Birtciel of Springfield, MO; granddaughter, Heidi Birtciel Mueller & husband, John of Leawood, Kansas; grandson, Tyler Birtciel & wife, Ashley of Rogersville, Missouri; and great-grandchildren, Bailey & Cash Quentin Birtciel, Sloane, Sutton & Sinclair Mueller, & Mary Grace Jones. She was preceded in death by her husband, Donald Q. Birtciel; her parents, Verna & Vonie Beeman; daughter, Donna Mae Birtciel; son, David Birtciel; granddaughter, Heather Birtciel Jones; and brothers, Vonie, E.C., and Jim Beeman. Graveside services will be held at 11:00 A.M., Wednesday, January 10, 2018 at Greenwood Cemetery, in Eureka. In lieu of flowers, the family has requested that memorial contributions be made to Emporia Presbyterian Manor, Memory Unit, the Alzheimer's Association, or the charity of the donor's choice. Contributions may be sent in care of Koup Family Funeral Home, P.O. Box 595, Eureka, KS 67045, which is overseeing arrangements. We would like to thank the staff at Presbyterian Manor for their kindness, support & loving care during Edna's last years.

Edna Mae Birtciel Edna Mae Birtciel of Madison, Kansas, passed away peacefully on Saturday, January 6, 2018, at Emporia Presbyterian Manor, at the age of 93. She was born on February 1, 1924, in El Dorado, Kansas, the daughter of Vonzo and... View Obituary & Service Information

The family of Edna Mae Birtciel created this Life Tributes page to make it easy to share your memories.

Send flowers to the Birtciel family.