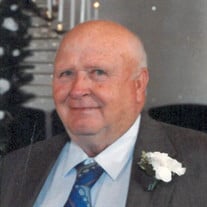 Earl Glen Deniston, formerly of Eureka, died on Wednesday, February 3, 2016, at Lakepoint Nursing and Rehabilitation Center in El Dorado, Kansas, at the age of 85. He was born January 25, 1931, in Greenwood County, the son of Glen and Lillian (Ebberts) Deniston. He was raised in the Eureka area and graduated from Tonovay High School. After his schooling, he joined the United States Navy where he served with honor and dignity in the Korean War for four years. He served as a radar technician on a cruiser and did electronics repair. After his discharge, he returned to Greenwood County and began working for Boeing. He later farmed near Piedmont and then near Reece for Koch Industries. He retired to Eureka in the early 2000’s. Earl enjoyed canning all kinds of fruits and vegetables that grew in his garden. He also very much enjoyed giving away his produce to family and friends. He was a member of VFW Post #2712 and the American Legion. He is survived by four sons, Kevin and wife, Dianna Deniston of Scott City; Jack and wife, Carol Deniston of El Dorado; Daniel and wife, Shelley Deniston of Garden City; and Scot Deniston of Neal; six grandchildren; sixteen great-grandchildren; and one brother, Eugene Deniston of Jacksonville, Florida. He was preceded in death by his parents Glen and Lillian (Ebberts) Deniston, foster father Roy Andrews, three sisters, Wanda Young, Leota Knowles, and Cherry Sue Wallace; and one brother, Jack Deniston. Funeral services will be held at 2:00 P.M., Friday, February 5, 2016 at Koup Family Funeral Home, in Eureka, with Mr. Jayme A. Koup officiating. Interment will follow at Greenwood Cemetery. Visitation hours are set from 5:00 P.M. to 7:00 P.M., Thursday, at the funeral home. In lieu of flowers, the family has requested that memorials be made to Boys Town. Contributions may be sent in care of Koup Family Funeral Home, P.O. Box 595, Eureka, KS 67045, which is in charge of service arrangements.

Earl Glen Deniston, formerly of Eureka, died on Wednesday, February 3, 2016, at Lakepoint Nursing and Rehabilitation Center in El Dorado, Kansas, at the age of 85. He was born January 25, 1931, in Greenwood County, the son of Glen and Lillian... View Obituary & Service Information

The family of Earl Glen Deniston created this Life Tributes page to make it easy to share your memories.

Send flowers to the Deniston family.