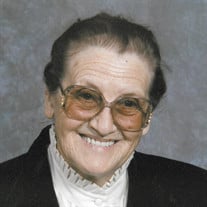 Dorothy Marie (Ashlock) Denchfield, formerly of Neal, died on Friday, July 24, 2020, at Lakepoint El Dorado, at the age of 99. She was born on October 29, 1920, in rural Greenwood County, the daughter of Fred Marion and Sadie May (Sharp) Ashlock. She was raised in Neal and graduated from Neal High School with the Class of 1940. She later attended cosmetology school and had her own shop. In the early 1940’s, Dorothy was united in marriage to Leslie Porter Denchfield. To this union, two children were born. This marriage later ended in divorce. During the war, she worked at Boeing for a short time. Dorothy returned to Neal and practiced cosmetology out of her house. She also served as the Postmaster for Neal for a time. Dorothy was a member of the Neal United Methodist Church. She is survived by one son, David and wife, Sigrid Denchfield of Climax; two grandchildren, Heather Denchfield and Jeff and wife, Jennifer Denchfield; two great-grandchildren; and numerous nephews and nieces. She was preceded in death by her parents; son, Freddie Leslie Denchfield; granddaughter, Rebecca Anne Denchfield-Stone; and twelve siblings: Marion William Ashlock, Edward Arthur Ashlock, Sylvia May Sattler, Goldie Faye Cross, Nora Leona Ashlock, Mary Alma McCleary, Fred Andrew Ashlock, True Melvin Ashlock, James Lowell Ashlock, Melba Ione Donaldson, and Boyd O. Ashlock. Memorial services will be held at 10:00 A.M., Friday, July 31, 2020 at the Neal United Methodist Church with Pastor Susan Galvan of the Severy United Methodist Church officiating. Masks are required to attend the service. Cremation has been effected. Inurnment will follow at Neal Cemetery. In lieu of flowers, the family has requested that memorials be made to the Neal Community Building. Contributions may be sent in care of Koup Family Funeral Home, P.O. Box 595, Eureka, KS 67045, which is overseeing arrangements. Condolences may be left for the family online, at koupfunerals.com.

Dorothy Marie (Ashlock) Denchfield, formerly of Neal, died on Friday, July 24, 2020, at Lakepoint El Dorado, at the age of 99. She was born on October 29, 1920, in rural Greenwood County, the daughter of Fred Marion and Sadie May (Sharp) Ashlock.... View Obituary & Service Information

The family of Dorothy Marie (Ashlock) Denchfield created this Life Tributes page to make it easy to share your memories.

Send flowers to the Denchfield family.