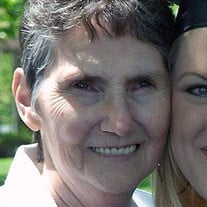 Dorcas Baugh went peacefully to meet her Lord on Monday, September 11, 2017, surrounded by her family at Via Christi – St. Francis Hospital, in Wichita, at the age of 78. A Greenwood County resident since 1966, Dorcas was a loving mother, grandmother, great, and great-great-grandmother and will be greatly missed by family and many friends. Dorcas Lucille McClanahan was born on December 9, 1938, in La Cygne, Kansas, the youngest daughter of Roy Edward McClanahan, and Eva Caroline McClanahan. On February 13, 1955, she was united in marriage to M.D. “Mike” Baugh. To this union, three daughters were born. They made their home in Boicourt, Kansas where she was a homemaker. In 1966, the family moved to Greenwood County. After many years as a homemaker, Dorcas became Postmaster of Climax, KS 67137, a position she held for many years. In the early 1980’s, she changed career paths and went to work at Medicalodge in Eureka as a physical therapy assistant, where she worked until retirement. Dorcas loved to sew and quilt. She spent many happy hours with her church friends, preparing beautiful quilts for the annual church bazaar. She also loved going shopping with her best friends Connie and Phillip Bratton and Ardeth Longfellow and as her health deteriorated over the past few years, she sorely missed spending time with her friends and church family. She is survived by three daughters, Linda Beyer of Mulvane, Kansas; Dava Hughes of Waverly, Kansas; and Donna Crowley and husband, Sean of Cunningham, Kansas; eight grandchildren: Ben Beyer, Brandi Wilson, Jeremy Hughes, Kimberlee Hughes, Clayton Hughes, Christina Carmichael, John Robinson, Judy Warner; thirteen great-grandchildren; three great-great-grandchildren; and two sisters, Marjorie Lewis of Amsterdam, Missouri; and Mary Straw of Little Rock, Arkansas. She was preceded in death by her husband, Mike; sons-in-law, Jerry Hughes and Jim Beyer; her parents; a brother, Dale McClanahan; and an infant sibling. Dorcas did not want a funeral – “no fuss”, she said. Therefore in accordance with her wishes a memorial will be held on Sunday, September 17, 2017 at the Climax United Methodist Church during the regular Sunday service. “Short and sweet with a couple of songs,” she always knew just what she wanted. A family inurnment will follow later at Oaklawn Cemetery, La Cygne, Kansas. In lieu of flowers, the family has requested that memorials be made to the Climax United Methodist Church. Contributions may be sent in care of Koup Family Funeral Home, P.O. Box 595, Eureka, KS 67045, which is overseeing arrangements. Condolences may be left for the family online, at koupfunerals.com.

Dorcas Baugh went peacefully to meet her Lord on Monday, September 11, 2017, surrounded by her family at Via Christi &#8211; St. Francis Hospital, in Wichita, at the age of 78. A Greenwood County resident since 1966, Dorcas was a loving mother,... View Obituary & Service Information

The family of Dorcas Lucille Baugh created this Life Tributes page to make it easy to share your memories.

Send flowers to the Baugh family.