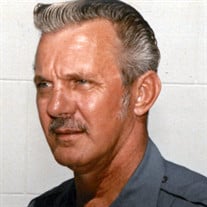 Donald Lee Patterson of El Dorado, died on Thursday, April 12, 2018 at Lakepoint Nursing and Rehabilitation Center, in El Dorado, at the age of 82. He was born on July 5, 1935, in Peabody, Kansas, the son of Lacester Devern and Dorothy Loretta (Fellingham) Patterson. He was raised Kansas City, Missouri and attended local schools. In 1953, Don was united in marriage to Dorothy Diane Nuttell. To this union one child was born. This marriage later ended in divorce. In 1956, Donald enlisted in the United States Army, serving during the Korean War with honor and dignity. He was honorably discharged in 1958. He worked for General Motors while going through law enforcement training. In 1972, Donald began serving as the Chief of Police for the City of Peabody. He later worked for Davis Electric in Peabody. In 1977, he began working for the City of Eureka Police Department. In 1978, he started at the Butler County Sheriff’s Department, for a short time until he was offered a position with the Greenwood County Sheriff’s Department, rising to the rank of Undersheriff under Charlie Samuels and Lowell Parker. On July 8, 1985, Donald was united in marriage to Marilyn “Mickey” Van Buskirk in Madison. They made their home in Eureka. This marriage later ended in divorce. He retired from the sheriff’s department in 1987. With Mickey, Don worked in the hospitality industry for Motel 6 and Super 8. Don returned to law enforcement one last time with the Erie Police Department in 1989. Don was a member of the Kansas Sheriff’s Association, the Fraternal Order of Police, and the National Rifle Association. He is survived by his children, Terry Lee and wife, Karen Patterson of Spring Hill, Florida; Chris and wife, Kelli Patterson of Saint Joseph, Missouri; step-son, Freddie and wife, Judy Stuber of El Dorado; five grandchildren; and two great-grandchildren. He was preceded in death by his parents; and siblings, Betty Jo Barnhart, Denny Patterson, and Sara Lynn Patterson. Graveside services will be held at 4:00 P.M., Wednesday, April 18, 2018 at Greenwood Cemetery, in Eureka, with Pastor John Craighead of the Jefferson Street Baptist Church officiating. Visitation hours are set from 5:00 P.M. to 7:00 P.M., Tuesday, at the funeral home. In lieu of flowers, the family has requested that memorials be made to the Kansas Sheriff’s Association. Contributions may be sent in care of Koup Family Funeral Home, P.O. Box 595, Eureka, KS 67045, which is overseeing arrangements. Condolences may be left for the family online, at koupfunerals.com.

Donald Lee Patterson of El Dorado, died on Thursday, April 12, 2018 at Lakepoint Nursing and Rehabilitation Center, in El Dorado, at the age of 82. He was born on July 5, 1935, in Peabody, Kansas, the son of Lacester Devern and Dorothy Loretta... View Obituary & Service Information

The family of Donald Lee Patterson created this Life Tributes page to make it easy to share your memories.

Send flowers to the Patterson family.