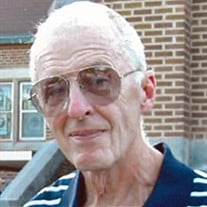 Donald Gene “Don” LeVieux of Eureka, died on Sunday, November 13, 2016 at his home in Eureka, at the age of 84. He was born on July 31, 1932, in Eureka, Kansas, the son of Glen August and Neva Estelle (Thompson) LeVieux. He was raised in Eureka and graduated from Eureka High School. He later attended Kansas State Teacher’s College in Emporia for 4 ½ years. He played football and graduated with a Bachelor’s Degree in Business. On June 2, 1954, Don was united in marriage to Jacque Jensen at Sacred Heart Catholic Church in Eureka, where they made their home. After his schooling, he purchased Gamble’s Sporting Goods store from his parents. Don and Jacque owned and operated D&J Sporting Goods in Eureka for 45 years, only retiring in 2015. He was a member of Sigma Tau fraternity, and the Eureka Volunteer Fire Department from 1958 until the early 2000’s. He is survived by his wife, Jacque of the home; Mike LeVieux of Eureka; Jim LeVieux of Eureka; Susan, and husband David Ball of El Dorado; and Teri LeVieux of Eureka; five grandchildren: Ben Bunyard, Samantha LeVieux, Nathan Bunyard, Shannon and husband, Kyle Rockhill, and Alexa LeVieux; and two great-grandchildren: Gabe Shepherd and Brody Rockhill. He was preceded in death by his parents; one grandson, Zachary Jordan LeVieux; and one sister, Phyllis Anderson. Memorial services will be held at 2:00 P.M., Thursday, November 17, 2016 at Eureka Lake, Lot #59B, with Mr. Jayme Koup officiating. In lieu of flowers, the family has requested that memorials be made to Harry Hynes Memorial Hospice. Contributions may be sent in care of Koup Family Funeral Home, P.O. Box 595, Eureka, KS 67045, which is overseeing arrangements. Condolences may be left for the family online, at koupfunerals.com.

The family of Donald Gene "Don" LeVieux created this Life Tributes page to make it easy to share your memories.

Send flowers to the LeVieux family.