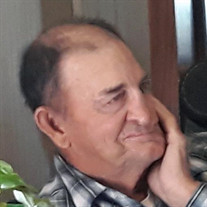 Donald Dean Chaplin, of Piedmont, died Saturday, October 31, at the Robert J. Dole V. A. Hospital, in Wichita, at the age of 84. Don was born May 13, 1936, in Enid, Oklahoma, the son of Veryl Aaron and Esther Cecilia (Kretchmar) Chaplin. He lost his father at age 3 and lived with his grandparents until his mother remarried. He then moved to Waverly, Kansas where he was raised on the farm and graduated from Burlington High School. Following his graduation, Don joined the Army where he served with honor and dignity. Upon completion of his service, he returned home where he married Vienna Marie Henley, on November 26, 1960 in Burlington. Together they raised three children. The family lived in Waverly, before moving to Climax, Kansas in 1973. Don farmed in the Climax area, before moving to Piedmont in 1982, where he farmed until his retirement. Vienna preceded him in death on May 6, 2001. Don was a member of the Sacred Heart Catholic Church of Eureka, and the Elk County American Legion. He is survived by his children: Harlan Chaplin and wife, Jaylene of Fredonia; Francis Chaplin and wife, Sunni of Piedmont; and Glenda Chaplin and wife, Stephanie Mitchell of Olathe; four grandchildren: Travis Vaughn of Oklahoma City, Oklahoma; Jaimie and husband, Nathan Greenwood of Council Grove; and Baily and Braxton Chaplin, both of Fredonia; two great-grandchildren: Hannah and Natalie Vaughn; and seven siblings: Larry Hess and wife, Sallee of Waverly; Dale Hess and wife, Barbara of Lake Spivey, Georgia; Wayne Hess of Waverly; Sherlyn Graham of Wichita; Marilyn Eccles and husband, Gene of Waverly; Norma Stagner and husband, Dale of Wichita; and Joyce Krueger and husband, Dwight of Lebo. He was preceded in death by his parents and wife. Cremation has been effected. A private family inurnment will take place at a later date.

Donald Dean Chaplin, of Piedmont, died Saturday, October 31, at the Robert J. Dole V. A. Hospital, in Wichita, at the age of 84. Don was born May 13, 1936, in Enid, Oklahoma, the son of Veryl Aaron and Esther Cecilia (Kretchmar) Chaplin. He... View Obituary & Service Information

The family of Donald Dean Chaplin created this Life Tributes page to make it easy to share your memories.

Send flowers to the Chaplin family.