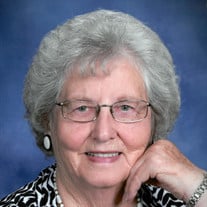 Dolly June Ashlock of Eureka, died on Monday, November 15, 2021, at Vintage Park Assisted Living, in Eureka, at the age of 89. A joyous day it was for her as she met her heavenly father, held her baby girl, and hugged her beautiful granddaughter again! Dolly was born on September 6, 1932, in Quincy, Kansas, the daughter of Arthur Marion and Anna Marian (Crouch) Watts. She was raised in the Quincy area with her twelve brothers and sisters and attended local schools. On November 14, 1950, Dolly was united in marriage to Boyd Otis Ashlock in Yates Center. They made their home in Quincy. To this union, four children were born. Her husband, Boyd, preceded her in death on September 5, 1983. Later, Dolly moved to Virgil where she lived for many years. Dolly was known for being a hard worker. She was employed at the sewing factory in Yates Center until it closed. She then worked at Hopkins Manufacturing in Emporia until a housekeeping job became available at Greenwood County Hospital. Dolly also worked as a CNA at the Eureka Nursing Home and did side jobs sewing and cleaning homes and businesses. She worked until her retirement in 2004, an accomplishment we were so proud to celebrate with her. Dolly never remarried but devoted her time to her family and friends. If you ever sat at Dolly’s kitchen table you were blessed, as she was a talented baker and feeding her guests was the way she showed her love. She spent much of her free time cooking, mending, and crafting. She sewed stuffed animals for her grandchildren, helped with 4-H projects, and crocheted. Until her health wouldn’t allow it, she never missed a program, event, or ballgame. Dolly faced a huge battle with cancer in 2001 head on. Her faith and relationship with God grew in those days. She has always been a great example of God’s love, forgiving when it seemed impossible and showing great care and love for all that knew her. She was a member of the Jefferson Street Baptist Church, the Greenwood County Hospital Old-timer’s Club, and the Greenwood County Cancer Support Group. She is survived by three children: Wade and wife, Irene Ashlock of Kiefer, Oklahoma; Kemp and wife, Tammy Ashlock of Hamilton; and Rochelle and husband, Lee Butler of Virgil; six grandchildren: Russ Howard, Bridget Ashlock, Danielle Albert, Satanna Potter, and Braxton Butler; seven great-grandchildren; and four sisters: Nellie Johnson of Severy, JoAnn Ashlock of Virgil, Anna Mae Hare of Coyville, and Sharon Hellman of Eureka. She was preceded in death by her parents; husband; daughter, Neda Gay Ashlock; one grandchild, Shakoda Shell Potter; daughter-in-law, Janet Johnson Ashlock; and siblings, Adeline Hobbs, Bert Watts, Walter Watts, Fay Johnson, Alma Lee Schlotterbeck, Kenneth Watts, John Watts, and Arthur “Bub” Watts.  Graveside services will be held at 11:00 A.M., Friday, November 19, 2021, at Virgil Cemetery with Pastor Bob Robison of the First Christian Church of Madison officiating. In lieu of flowers, the family requests that memorials be made to Good Shepherd Hospice or to Vintage Park Assisted Living. Contributions may be sent in care of Koup Family Funeral Home, PO Box 595, Eureka KS 67045, which is overseeing arrangements. Condolences may be left for the family online, at koupfunerals.com.

Dolly June Ashlock of Eureka, died on Monday, November 15, 2021, at Vintage Park Assisted Living, in Eureka, at the age of 89. A joyous day it was for her as she met her heavenly father, held her baby girl, and hugged her beautiful granddaughter... View Obituary & Service Information

The family of Dolly June Ashlock created this Life Tributes page to make it easy to share your memories.